This entry consists of a funny little sequence I inadvertently captured at the salt marsh. This, incidentally, is the site of last year’s Osprey photos. We haven’t seen any Ospreys there yet this year, but it’s still a bit early. I’m a little concerned that we won’t, since the main nest platform fell down over the winter and had to be repaired by the Land Trust.

I don’t know how finicky Ospreys are about disturbances to their nests, so I have no idea if they’ll return and rebuild right away. I’m sure it’ll eventually get used again, even if it’s not this year, since it’s a perfect habitat and nest structure. 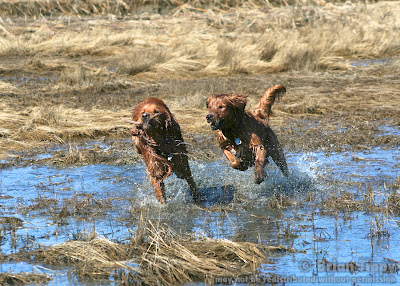 The dogs were romping after sticks, and while the tide is fairly low, it’s high enough to hide the deep channels dug through the mud. Some of them seem to be natural products of drainage as the tide goes out, but others are artificial channels dug during old efforts to eliminate mosquito breeding sites. 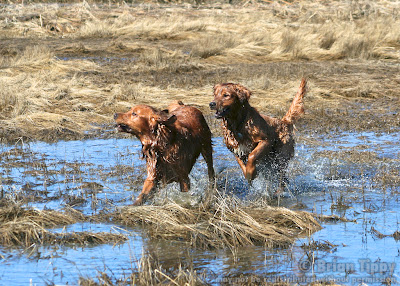 Regardless of how the channel is made, on the surface, it just looks like a muddy, grassy place to play, streaked with long puddles a few inches deep.

However, what Jax doesn’t realize is that while Comet heads slightly to his right here, and Jax comes around to grab at the stick, Comet apparently remembers the channel of several-foot-deep water that Jax doesn’t. 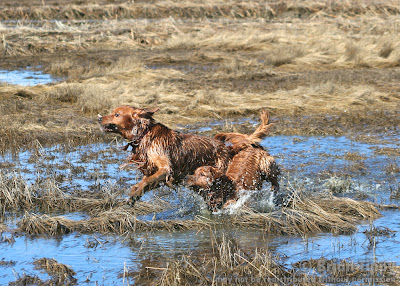 I feel bad for the dog in this picture, but the timing was just perfect. You can see that Jax’s attention is off the stick and back to his feet as he grapples with the realization that the ground is about three feet further away than he thought. 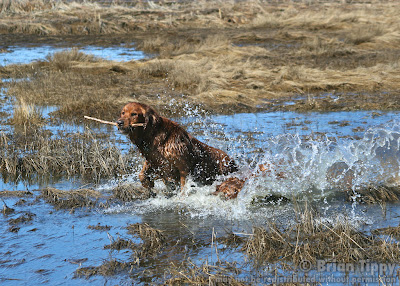 Comet gets slowed down too, but Jax actually disappears for a second. He may have slammed his face into the mud too, but he doesn’t seem to get hurt here, just very, very surprised. 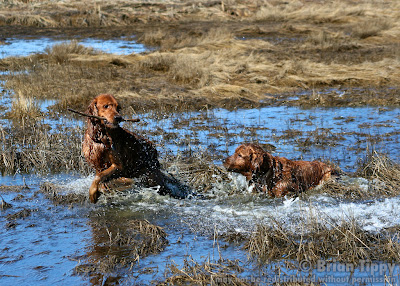 Now, I’m not inclined to anthropomorphize dogs, but there seems to me to be something approximating a gleeful malice in Comet’s expression, a sort of “ha ha” back over his shoulder to his bratty, stick-thieving friend.

Jax, for his part, might have a sort of “why didn’t you tell me?” expression.

Still, I doubt any of that’s really going on in their heads, but if dogs can feel a sense of satisfaction for an opponent outsmarted, Comet’s surely feeling it at least a little bit. 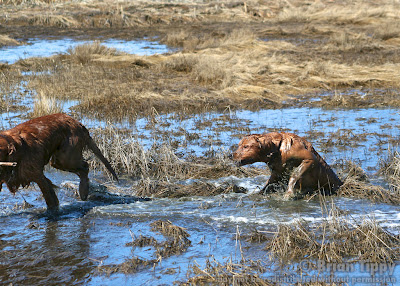 Because he just takes off, pleased as punch, and leaves Jax to haul himself out of the channel. 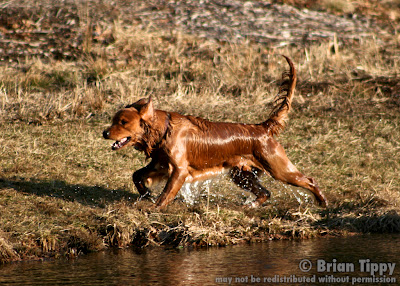 It’s been just over a year since we got Jax. It was March 21, 2009, a Saturday, that we went up to Maine and came back with him. He wasn’t a planned dog, and I didn’t think I was ready for another pup with Gus’s death so recent and fresh, but he fell in our lap that day, and now I sincerely feel like he’s always been our dog. After writing that, I realized I said something remarkably similar about Comet in 2008.

He’s every bit the hardcore athlete we hoped for, and he gives Comet a real run for his money. He’s slightly dampened Comet’s enthusiasm for being chased, since he catches him much more quickly than when Jax was a puppy. Still, each would rather be right around the other in the house or even out in the woods. 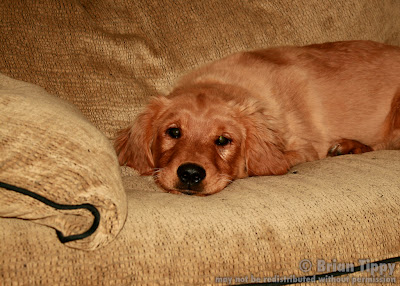 It may feel like we’ve spent a lifetime with Jax, but I remember with great clarity the little hell puppy he was when we first brought him home. What I don’t remember so clearly are the times when he put on a cute sleepy face like this. I assume I took this picture during a very, very rare bout of brief exhaustion brought on by a long walk and a play session with Comet. 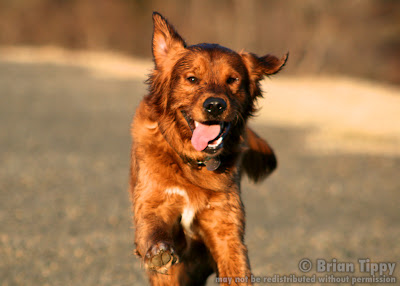 This is the dog who will always stick in my memory, the fiery, white-blazed guy who seems to be made of springs and mischief, forever bounding about, ears akimbo, with a glint of focus and a hint of insanity in his eyes.
Posted by Brian at 5:00 PM No comments: