How We Drowned a Phone 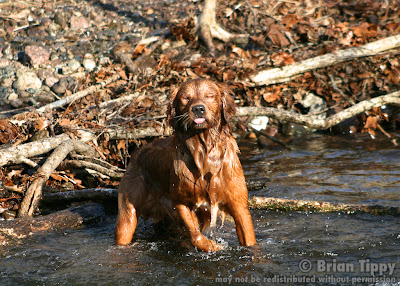 Andy and I did a little exploring, and we found a brand new place to take the dogs. As usual, I won’t mention the best little locations like this one online, because I have an irrational fear that hordes of people will descend upon my favorite quiet spaces. Since the number of people who read this blog is in the hundreds, not the millions, I think I’m safe, but you never know.

(Update: Since switching the site over to Blogger, I've taken to tagging locations, so in this updated version of the post, I've tagged this entry as the Woodbridge Land Trust).

Anyway, this new little place has a little river that runs through it, and the dogs are highly enthusiastic about a walk that includes a field, a river, a swamp, then the river again, then the field again, and then the car. Andy and I are enthusiastic too, since the dogs can get muddy, get clean again in the river, and then dry off a bit fetching in the field before we go back in the car. 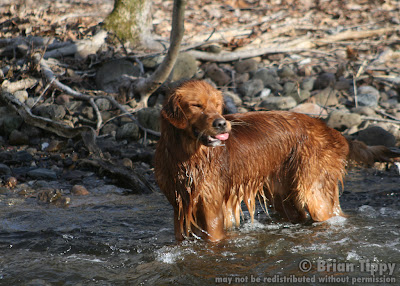 One other little quirk of this location and its river is that the river is the outflow of a drinking water reservoir, and as such, its level is subject to the whims of the local water company, not nature. After some heavy rains, the water company released an immense amount of water, and just after these pictures, both dogs washed downstream and fetched up against a log. Andy was on one side of the river, and I was across it, taking these pictures.

In about a twenty second span of time, I dropped my camera, opened the buckle on the camera bag and let it fall, and jumped waist-deep into freezing water. Comet washed under the log on his own. Andy jumped in, lost his footing, was doused to the neck, and hauled Jax out by the collar.

The only casualty of the day: Andy’s phone. All in all, I consider it a fair trade.
Posted by Brian at 5:00 PM