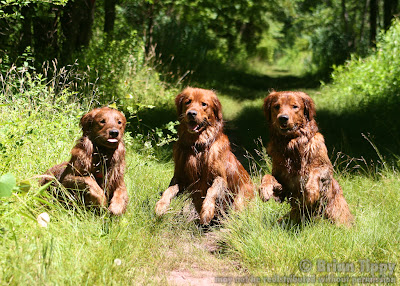 On every walk, we practice “stay” at least once. Learning to honor the command in different environments helps dogs generalize the skill for more situations and helps deepen the habit of obedience in the face of serious temptation.

I’ve found that this kind of stay can be self-reinforcing if they’re released in an exciting way. When you first build the skill, you do it with one dog at a time and reward him for gradually longer periods of holding position.

Once he has the hang of it, you can try it in the “wild” and set up all three to stay together. Then, you say “ready......OK!” and praise effusively when they all run to you. It’s so exciting that it reinforces itself.

If you’re careful (or set to quick shooting mode and hold the button down), you can catch them in the instant they break. 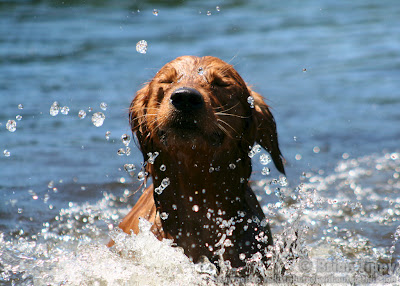 Today was another opportunity for Ojo to practice his swimming. If I throw a stick really far, the other two will dash out and chase it. Ojo, however, is still splashing himself in the face instead of making efficient forward progress.

He’s already a good bit better than he was the previous time, but he’s not quite there yet. 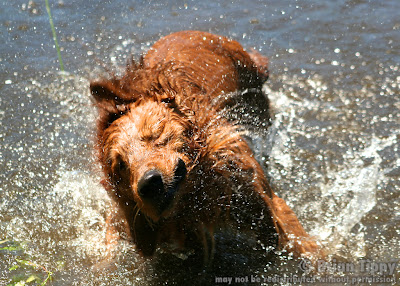 At the shake, however, Ojo is already a master. 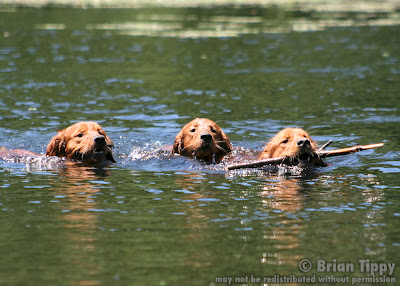 Two minutes later, something clicked for Ojo and he stopped splashing so much. As Comet came back with the stick, Ojo (center) swam out and joined the pursuit with Jax.

Comet is still the untouchable king of the water. Whether from experience or from something structural, his waterspeed is noticeably faster than Ojo’s and Jax’s. Still, both younger dogs put in a valiant effort here.

With a little more practice, though, Jax and Ojo may still offer a serious challenge. They’ll have plenty of opportunities, culminating in our vacation with Kate and her family at the end of August.
Posted by Brian at 12:00 PM