Ojo Gets the Hang of It 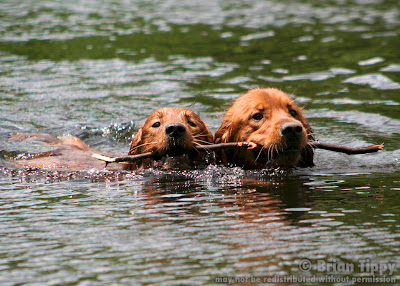 Two days ago, Ojo was still splashing himself in the face, and couldn’t hold a mixedly-metaphorical candle to Comet’s swimming ability. By today, he couldn’t quite beat Comet to the stick, but he was able to keep up with him enough on the way back to get a hold of it. 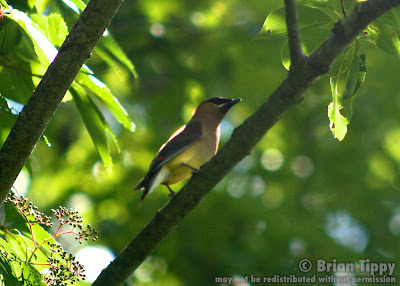 I got really, really close to a great shot here, but I didn’t quite get it. It took some careful cropping and post-processing to get the photo this good, so I’m not fully happy with it.

Still, it’s a decent picture of a really beautiful local bird, a Cedar Waxwing. He was likely hawking for insects over the stream on the other side of the path and fled to the woods when we came crashing through.

When I first saw him, I despaired that I’d be able to get a picture, since the camera was in the bag over my shoulder. Waxwings are a bit skittish, so I decided just to enjoy him. However, he stayed for a few seconds, then a few more, and then I was suddenly fumbling for the camera, trying to get it zoomed all the way in and focused before he disappeared.

I got three exposures before he flitted away, and this one was the best. 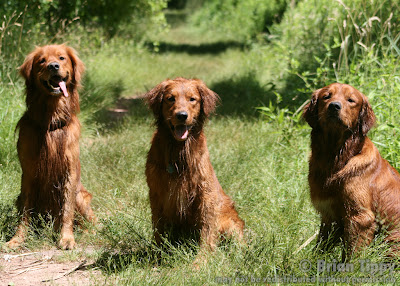 Of course, there’s the requisite sit-stay with distractions. Ojo and Comet are taking to it like normal Goldens. Jax, however, is so driven and focused that he actually halts his own natural panting so he can listen more carefully for the first, barest hint of a release word.

They all halt panting when they’re trying to hear a little better. I have dozens of pictures, though, of Jax doing it and relatively few of the other dogs.

It’s one of the things about him that reminds me most of Gus.