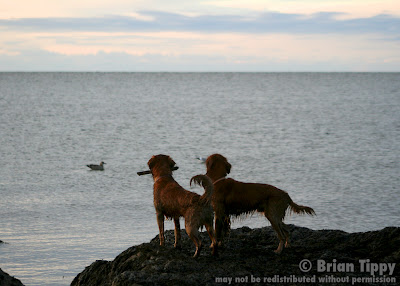 Andy was getting up really early for work this morning, so I got the bright idea that it would be fun to go for a sunrise walk up at Hammonasset park. Dogs aren’t welcome on the beaches during the swim season, and there’s a fee to enter the park. After October, though, it’s just a big, open, lovely place with beaches and marshes.

I don’t usually talk too much about the humans who join us on walks, but for reasons that will become apparent shortly, I’ll mention them this time.

Ben, Jen, Jeremy, and a very pregnant Naomi came to walk on the beach and watch the sun come up. The dogs, of course, wasted no time jumping in and out of the water and staring wistfully at seagulls out of reach. 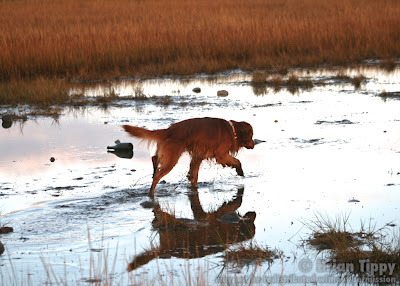 I like watching the sun rise, but I hate taking pictures of a sunrise. For me, the thing that’s the most sublime—with apologies to the Kantians among us who would deny that a sunrise provides the “check to the vital forces” (Kant, The Critique of Judgment)—is watching the sunrise change in its almost swift but almost imperceptibly slow way. Look away for a moment and look back, and it has certainly changed. Keep your eyes on it, and you’ll swear that it’s changing, but it’s hard to put your finger on exactly which piece is different.

I love it, and I love the overwhelming sense parade of a warm coffee in the hand, a sky wider than my field of vision changing across its whole scope, two red-gold blurs charging about interested in smells more than sights, a cold breeze seeping in through the zipper of my jacket, and friends close at hand. 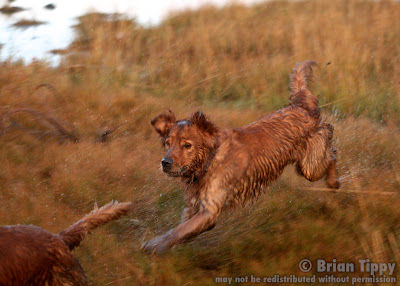 The catalyst for the whole plan was the wonderful pictures my friend Jill takes of her dogs during the post-sunrise golden hour. She routinely takes the dogs to the beach at dawn, and she takes advantage of the special light you only get just after the sun breaks the horizon. The pictures are beautiful, and I’m always jealous when I see them.

Let me break for a second to quickly plug her business: PoeticGold Farm Dog Training.

I was not disappointed by the light. Soon after sunrise, the dogs were lit up in spectacularly rich color, and they ran between the salt marsh behind us and the beach in front of us over and over. 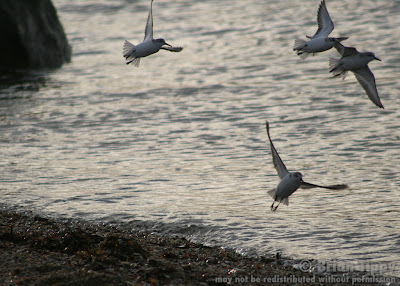 We startled a small flock of Sanderlings. When not being chased by Golden Retrievers, Sanderlings feed by running onto the wet sand as a wave recedes and feeding quickly on the creepy crawlies left on the sand. Then, they run away from the wave as it returns.

They run back and forth like clockwork toys, as if, as my dad puts it, they’re stitching the sand and sea together. That little description may be paraphrased from an earlier source than my father, so my apologies to any poets we may have unwittingly plagiarized. 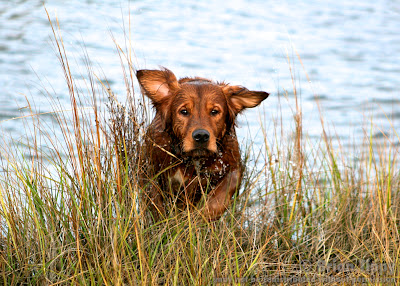 Our friends eventually succumbed to the cold, but Comet, Jax, and I continued on and walked around the rest of the marsh for another hour or so. I met back up with my four friends and my parents for brunch later, and my mom said to Naomi, who was due in a few days, “Who knows? The baby could even come tonight?”

Miriam was born the next day. I’m a fan.

Why is this part of the story next to a quintessential picture of Jax flying out of the water? No reason at all. It just felt like the right moment. And what else is there to say about Jax that isn’t crystal clear in the picture already? 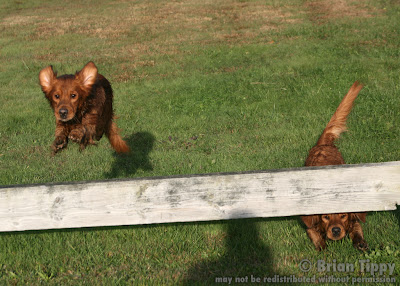 I’ll close the entry with two pictures. This first one was taken during our walk around the park. I set the dogs up on stay and then had them come to me over this wooden guard rail. I had in mind that I might get a great jumping picture in the great light.

The resulting picture was not what I intended, but it pretty neatly sums up the dogs’ personalities. 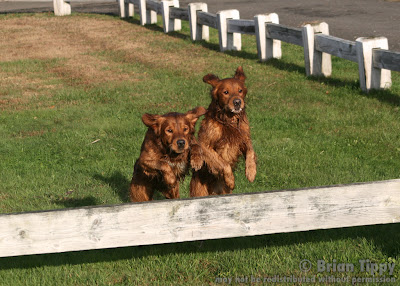 This one is a little more of what I had in mind, but I love both.