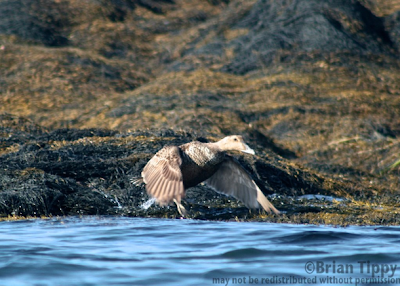 Before today, I didn’t even know that an eider was an actual kind of bird, rather than just an old-fashioned word for feathery pillow filling. As happens so often, I see a bird I don’t recognize, I get lucky with a few good shots of it, and I look it up later. Or, even better, I send a picture to my dad.

At first glance, this duck might not look too spectacular, but if you know your ducks, there are a few things that jump out. First, she’s much larger than many of the brown, mottled ducks you may have seen. Second, she’s on the ocean. Third, her head shape is completely different from, say, a mallard.

Sure enough, I had kayaked my way into a flock of Common Eiders. 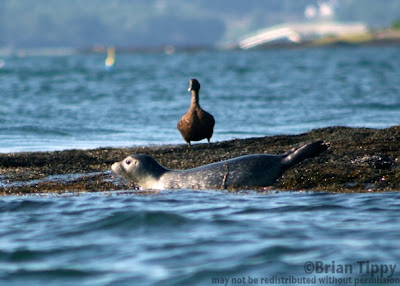 Not only was there a flock of eiders, but there was also a little Harbor Seal chilling out in a shallow pool formed by the rocks. I got pretty close before he slipped away into the water.

It might be time to mention that I found the eider and the seal during a kayak excursion on Casco Bay, out of Falmouth, Maine. I managed to grab the last few hours of daylight to put in at the Falmouth town dock and do a little exploring.

I have to admit some jealousy at the wilder nature of Casco Bay compared to my local Thimble Islands. I’ve heard that we have Harbor Seals, but I haven’t seen them, and I definitely don’t expect eiders at home. 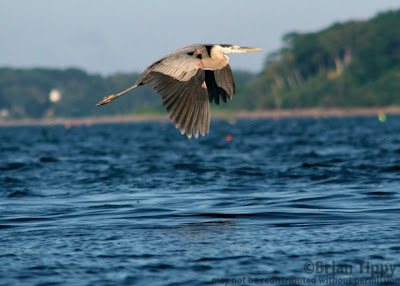 Great Blue Herons are more typical fare in Connecticut, but I happened to get really close to this one as he fished off an idle lobstering platform. He took off, circled around me, and landed back on the platform, giving me ample opportunity to catch him in flight. 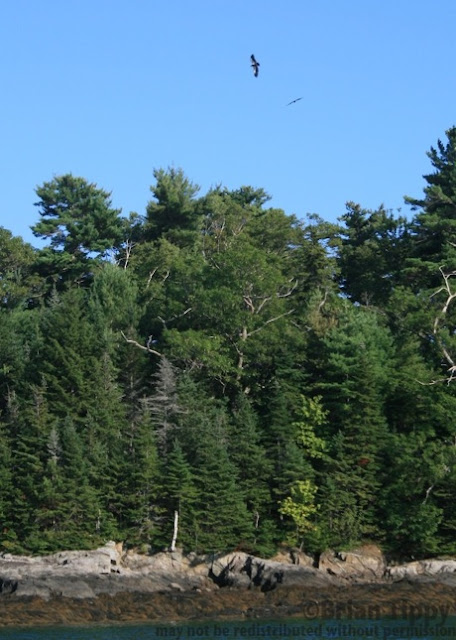 It’s hard to keep up much of a feeling of jealousy, though, when you’re slipping around a wooded island, watching Ospreys fight on the updrafts, wondering what’s around the next corner.
Posted by Brian at 3:00 PM