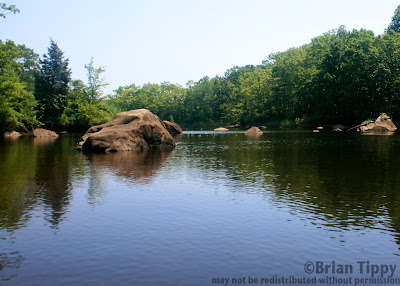 Jeremy lives near the Hammonasset River, which wends down through Clinton and empties out at Hammonasset Beach State Park. Jeremy and I had talked a couple of times about maybe putting kayaks in near his house and traveling all the way down to the ocean.

Given that today was the hottest day of summer thus far, Jeremy wisely decided it wasn’t a good day for his first major kayak outing. That freed him up to drop me off and pick me up, which made the whole process much, much more pleasant. 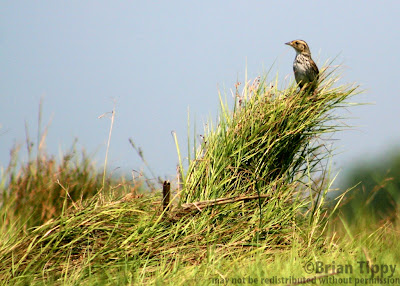 The river wends down through deciduous forest which transitions quite quickly to salt marsh. The luckiest picture of the day, by a long shot, was of this Saltmarsh Sparrow. These guys are known for being secretive and quiet, but I got lucky. This kind of moment can only happen in a boat as quiet and unobtrusive as a kayak. I can see a small bird hopping in the reeds, paddle quietly upstream of him, and drift toward him, snapping photos. If I had more robust camera equipment, I could do even better, but shooting with a twenty-year-old 75x300, I think I did alright. 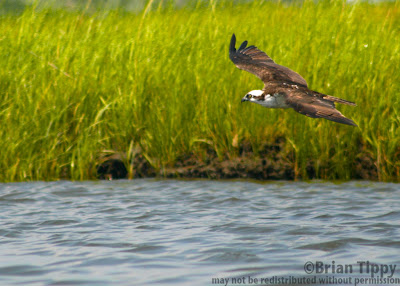 Ospreys are a far, far easier target, for three reasons: they’re common, relatively calm about humans, and large. There are also about four nests between the put-in and the open ocean, so opportunities abound. 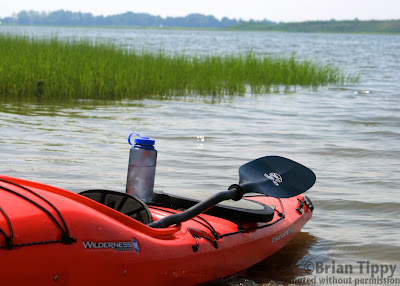 I underestimated both the heat and the distance: the map shows a big channel of open water in Hammonasset Point that doesn’t actually exist, so I had to travel a mile or two farther than I thought in order to go around a point to get to the open sound. Fortunately, Jeremy was a patient pickup, and it really was a beautiful spot to spend an afternoon—albeit a longer, hotter one than I intended.
Posted by Brian at 3:00 PM