"We Shall Not Cease From Exploration"

Over the last hundred years some wonderful people have given or sold land bequests back to their local towns to keep as open spaces for all of us to enjoy. Towns come together to share responsibility for stewarding these places, and they partner with state and federal agencies to manage them. The Goss family aggregated some 583 acres in Guilford along the East River, and after years of allowing public recreation, they sold it to the town in 2009. 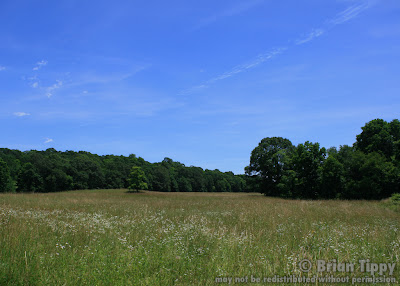 Jeremy told me about it, and a few days ago, we found the entrance and took a quick loop around the first big meadow. However, it was one of the hottest, haziest days of the year, so we didn't stay long, and I didn't take any pictures.

However, I went back there today with the dogs, including our new friend Riley, and struck a bit deeper into the preserve. 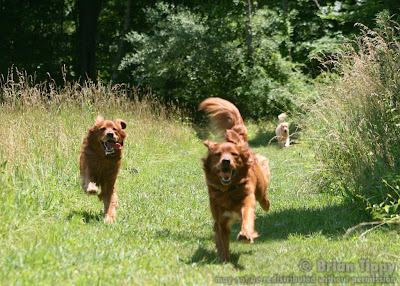 The East River is quiet, windy, and tidal at this point, so I was able to dip the dogs into it after a few minutes of running in the meadow. While it was quite a bit cooler today, I still wanted to get the dogs wet before they did too much sprinting about. 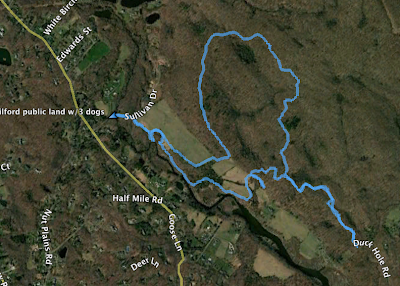 This is my route. The trail systems are still in development as the town plans and clears more trails. There's a very old blue-blazes here and there, and much of new trails are clearly based on some old, informal trails. So it's a bit confusing. I also only explored a fraction of the 583 official acres of the preserve, despite the fact that I was out there for 6.72 km (4.18 mi). 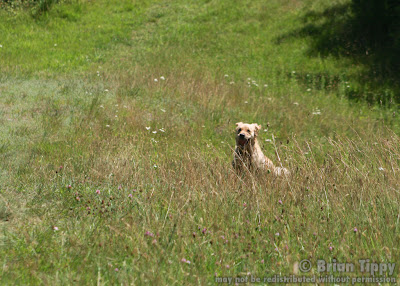 The best pictures came from the meadows. They're old farm fields that are maintained as open areas. The paths are mown around the edges, close to the line of the woods. That's clearly done very regularly, and the meadow itself is short and uniform enough that I'd guess it's hayed at least a couple of times a summer. Riley really enjoyed bounding through the grass. 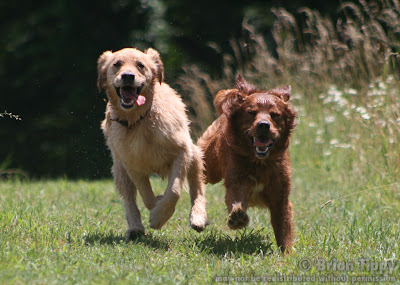 Jax gave Riley a lesson in racing back on command. Riley's still working on developing a reliable recall, so I took lots and lots of opportunities to encourage him to come back and to reward him strongly for doing so. I've crouched down here with the camera for a better angle on the running dogs, but crouching can also encourage a dog to come all the way to you.

It was quite a trick to get a good shot, slip the camera back into the bag, and to have my hands free in time to reward the pups, but I did OK. 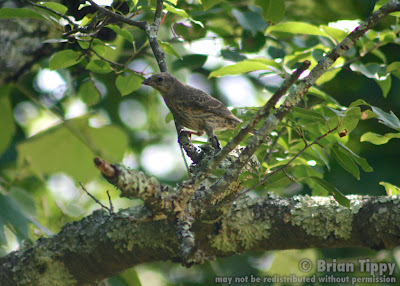 Even though the dogs didn't run into the heart of the meadow, since we always want to avoid disturbing birds and other creatures that nest on the ground in such places, our presence on and near the mown path was enough to spook a few birds up into the trees at the verge. Some are really easy to ID, like Red-winged Blackbirds and Barn Swallows, but this guy was a bit more difficult. After a bit of review and research, though, I'm fairly certain he's a juvenile Brown-headed Cowbird.

I'm looking forward to coming back again and again to find what else this space has to offer. Apparently, there's some old-growth forest hidden somewhere in the uplands, and while there's no trail map I can find of this place, I'm perfectly willing to turn on my GPS and go looking.
Posted by Brian at 4:00 PM