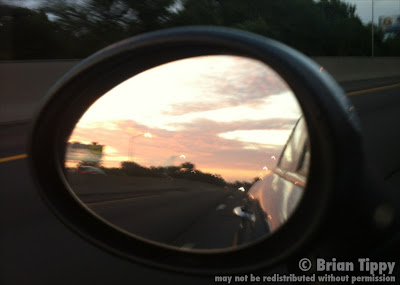 Manhattan might not, at first blush, seem like an obvious place to go sea kayaking, but about nine years ago, my friend Charlie and I circumnavigated the island as part of a guided trip.

He invited me out to try it again this year, so I got in my car at 5AM this morning and drove down to Liberty State Park in NJ. There's something to be said for an adventure that starts with a sunrise in your rearview. 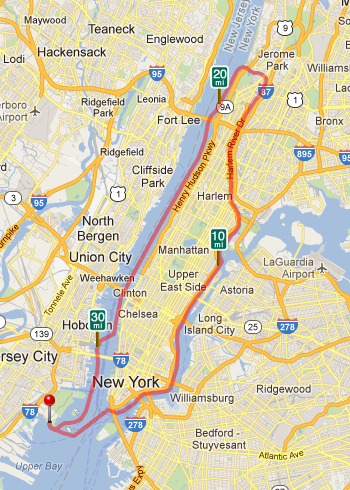 The trip ended up being about 34 statute miles (~30 NM). We crossed Upper Bay just south of the Statue of Liberty, and then went up the east side of the island on the East River. By using the tides, you can then head up the Harlem River while it's still reversing and then cross above the north end of the island to the Hudson as the tides start to flow out again. The timing is precise, but if you get it right, the current does some of the work of paddling the 34 miles.

I didn't think my phone's battery would hold up for 10 hours of running a GPS tracker, so I had to reconstruct the route afterwards.

Below is the view from south of Liberty Island, right at the trip's outset. You can see the new tower at One World Trade Center being built on the right. 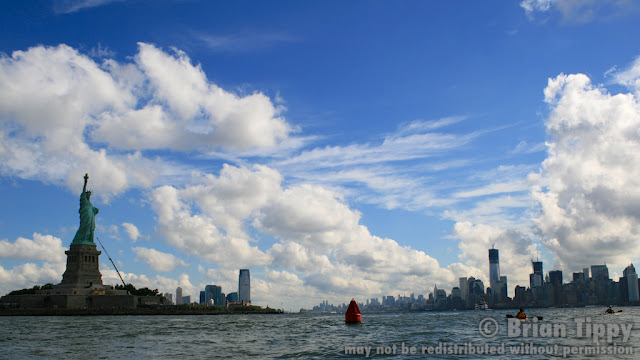 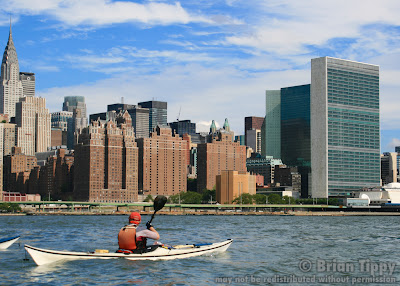 It's a whole other city from the water. Familiar buildings take on a new character. While the angle from the water does change your relationship with the architecture, part of the difference is that you're still in a huge city, but your separation from it is a world away from the crowded loneliness of the sidewalk. 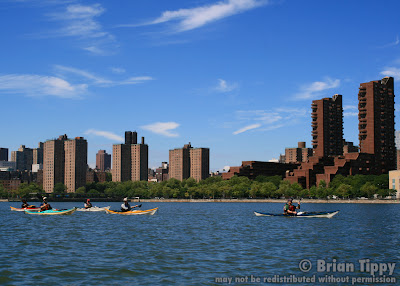 Even buildings less famous than the UN headquarters take on a new character. 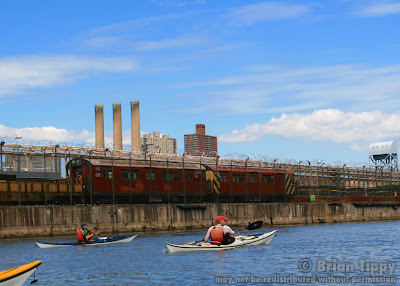 Sights like this are oddly beautiful, though smokestacks and rotting trains are sort of a sad testament to what we leave behind when we're not using it anymore. 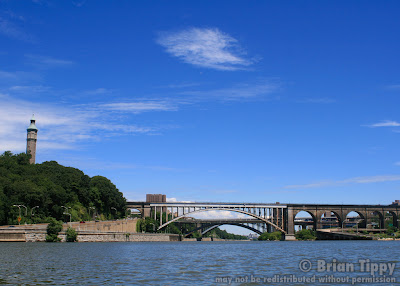 Charlie told me the history of High Bridge as we came up on it. It was finished in 1848 as part of an aqueduct system, and that aqueduct is largely credited with helping the city expand its population by providing clean, consistent access to water.

The masonry arches to the right are what remains of the original bridge, since some of the masonry arches were demolished and replaced by a single, longer steel arch in 1928. The result is a hybrid of two eras of engineering. 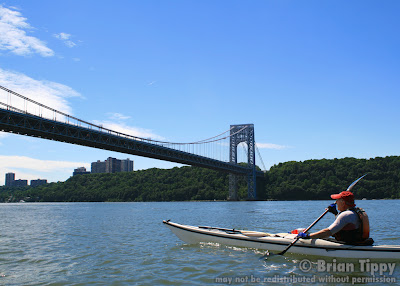 Not long after we rounded the top of the island and popped out on the Hudson River, we approached the George Washington Bridge, which I had driven over about seven hours earlier on my way down to Liberty State Park. 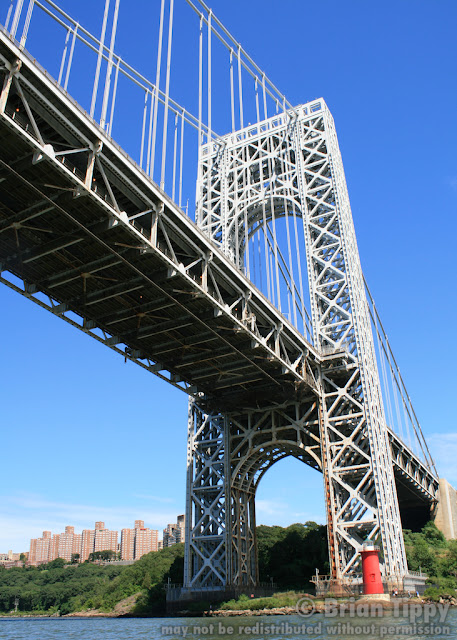 This is a neat photo, but it really gives you absolutely no idea of the scale of the bridge. It almost looks like a toy until you realize that the little red building at the bottom of the bridge is a lighthouse, not a fire hydrant. 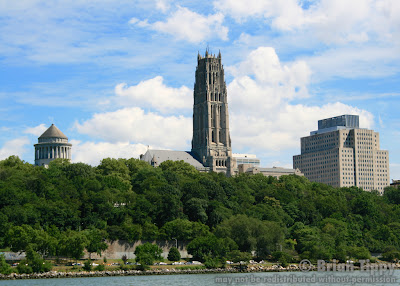 Further down the Hudson is another major New York landmark, the Riverside Church. Like the others, the perspective you get when you stand on the street and look is worlds away from what you see when you're sitting in a little boat on the water.

A little ways after the church, the onshore breeze picked up into a steady wind. Between the current downstream and the breeze upstream, the chop got pretty bad, so I had to put the good camera away. We also had to dodge a full-sized Norwegian cruise ship and all the other water traffic you find at the bottom of the Hudson. We had to cross from the Manhattan side to the New Jersey side around Chelsea, and in the shelter of a pier, I was able to get my last good shot of the day, of the group with the skyline in the background. That tower at One World Trade Center is going to be one big building when it's done. 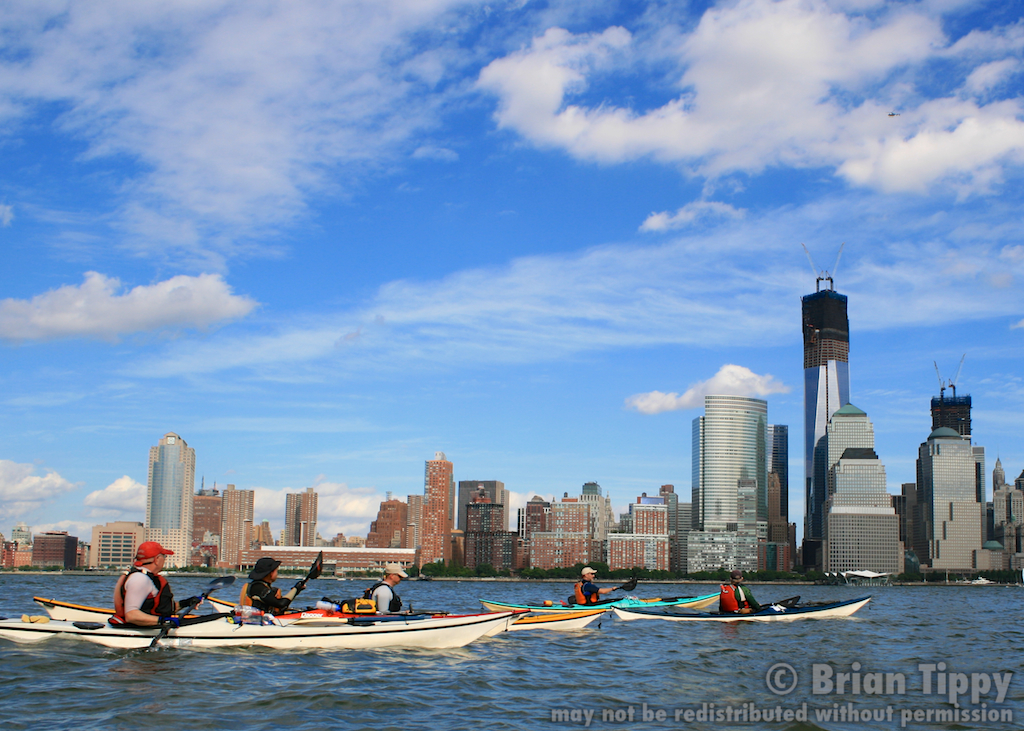 The trip took close to ten hours total, and I was only out of my boat a total of three times during the whole endeavor. So when we finally got back to Liberty State Park around 6PM, I was really ready to stretch my legs and drive back to Connecticut.
Posted by Brian at 6:00 PM