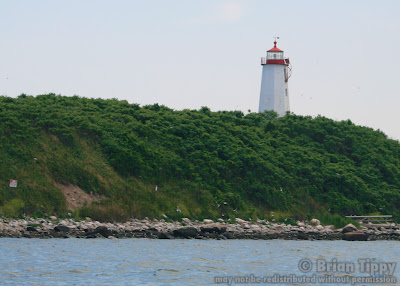 Falkner Island is about four miles off the shore of Guilford. I had heard there was a big nesting colony of Roseate Terns there. Since I'm having such a hard time differentiating between Roseate, Common, and Forster's while they're all in summer breeding plumage, I thought it would be neat to go look at Tern central station so I could get a sense of direct comparisons between different species.

While four miles of open water is a bit of an intimidating stretch to take on solo, I threw caution into the onshore breeze and headed straight for it. A little less than an hour later, I came up on Falkner and its lighthouse. For the last mile of the approach, Terns were constantly headed out over my head and back with fish in their beaks, presumably fishing to feed their fledglings. 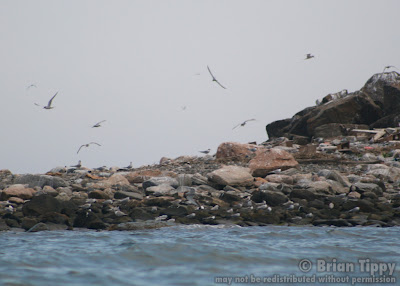 As I got closer and closer, I started to hear a strange roar. The water was choppy and there was a strong wind, so I couldn't make out what it was at first, but as I drew close, I realized it was the sound of an unbelievable number of terns all calling at once.

There are thousands of terns on that island, presumably from at least two, maybe three species, all taking off, landing, calling, chiding, swerving, and bothering each other in close quarters. The sound is amazingly loud and utterly unique.

I was planning on circling the island, rather than landing, and then heading back, since I've heard that you're supposed to avoid making landfall in order to protect the terns' nesting area. However, just as I pulled level with the eastern shore and snapped these shots, I heard a rumble of thunder. I had been watching the radar maps on my phone periodically, but while the big storm fifty miles southwest of me wasn't moving much, a new one began to form a few miles north of the Guilford shore. I had already cut it far to close, so I turned around and paddled an exhausting four mile sprint back to shore. I started seeing lightning strikes several miles north just before I got out of the water, which meant I had miscalculated and was well outside the realm of safety and good judgment, but I did get off the water well before any storm clouds actually came over.
Posted by Brian at 2:00 PM