A Burrito and a New Duck 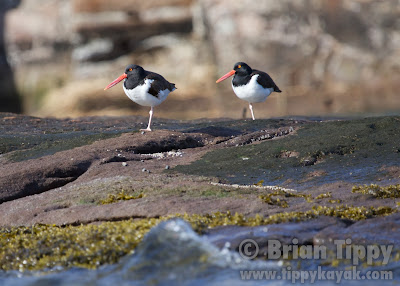 March is by far the earliest month that has ever found me in a sea kayak, but I have heard that we get Harbor Seals, and I figured, having seen them before in Maine, I should try to see them before they depart for colder climes in April.

I checked out lots of the little islands off of Stony Creek, but I didn't see any seals. I did, however, see these American Oystercatchers. I've seen them before, though not balancing on one leg to conserve warmth like this pair is. 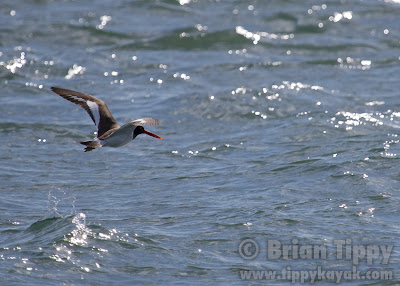 As I circled some of the small islands, the Oystercatchers circled a few times. I do my best not to disturb them and to shoot from a respectful distance with a telephoto lens, but they still moved about a bit as I searched for a place to stop and have a snack. 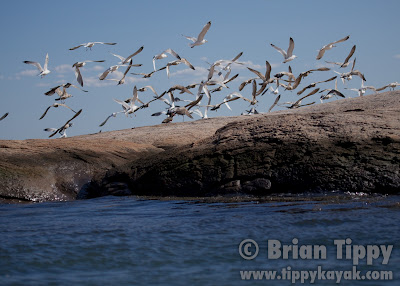 The gulls took off en masse before I even got close to this island, the first unowned rock that offered enough downwind shelter for me to disembark. That's a bit of a trick with an expensive camera and a kayak whose cockpit is only a few inches clear of the water. I do keep the camera in a drybag in case there are any wayward splashes, but even so, I needed some shelter from the two-foot swells in order to pop off the deck without being swamped. 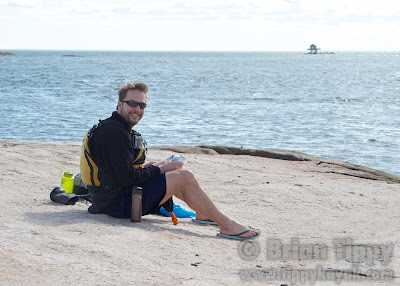 Before I embarked, I stopped off in downtown Branford to fill my thermos with some coffee from Common Grounds. I also grabbed a burrito from Tacuba. Despite the fact that it took me over an hour of paddling to find a suitable island, the burrito was still warm and completely delicious.

I set up the camera on a mini-tripod and used the remote shutter control to stage a little self-portrait of myself enjoying my goodies. 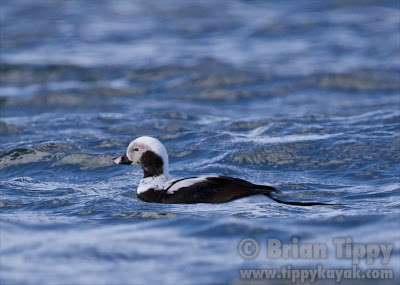 I had never even heard of Long-tailed Ducks until today, but on my way back to the boat ramp, I saw this little male, still in his winter plumage. I was completely lost in terms of IDing him on the spot, but I was able to capture a good enough photo to look him up from the comfort of an armchair later on. That's one more duck on my life list.
Posted by Brian at 4:00 PM