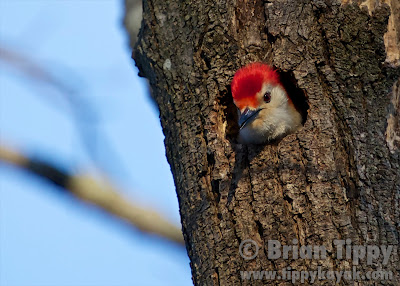 The Red-bellied Woodpecker is one of the most inaccurately named birds in the northeast. While they do have a russet streak on their bellies, it's almost never visible in the field. They're easy to distinguish with their red caps and their strikingly barred backs, but the name "Red-headed Woodpecker" was already taken by a bird with a much better claim to it. I might have gone with "Red-capped" myself, but nobody asked me.

Whatever the name, they're a bit shyer than the other common woodpeckers. They'll come down to a feeder for sunflower seeds or suet, but they tend to spook fairly readily and then keep a good distance, often chiding me from well out of telephoto range with their striking call.

This male, however, has chosen the dead side of a split tree trunk near our house for a hiding—and perhaps nesting—place, so instead of flying off when I open the back door, he flies to this hole, which is well within telephoto range.

When I was still enough, he alternated between drumming inside the hole and sticking his head out to call, so I caught a few good exposures of him when he did. 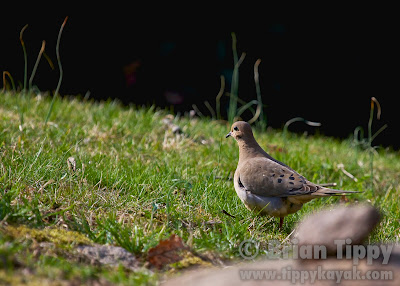 On an earlier attempt to catch a picture of this elusive woodpecker, I was standing as still as possible and waiting to see if he'd come closer once he was used to me. I spent the time shooting the birds who were less bothered by me, including this Mourning Dove. I'm not sure what it is about these doves that they seem quite beautiful in some poses because of their striking markings and so clumsy in others; perhaps it's their proportions? 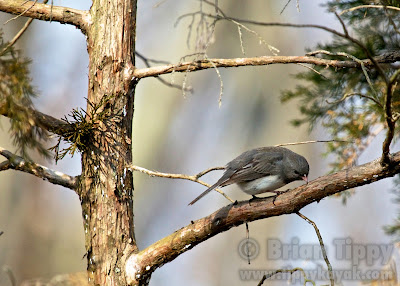 The last little guy I caught during my woodpecker-stalk was this Dark-eyed Junco. They're about as durable as little birds can be when it comes to a person walking around and shooting pictures. They'll fly off if you get too close, but if you're still, they'll come back fairly readily and do their thing with only a glance over at you now and then to make sure you're not doing anything shady.
Posted by Brian at 6:45 PM