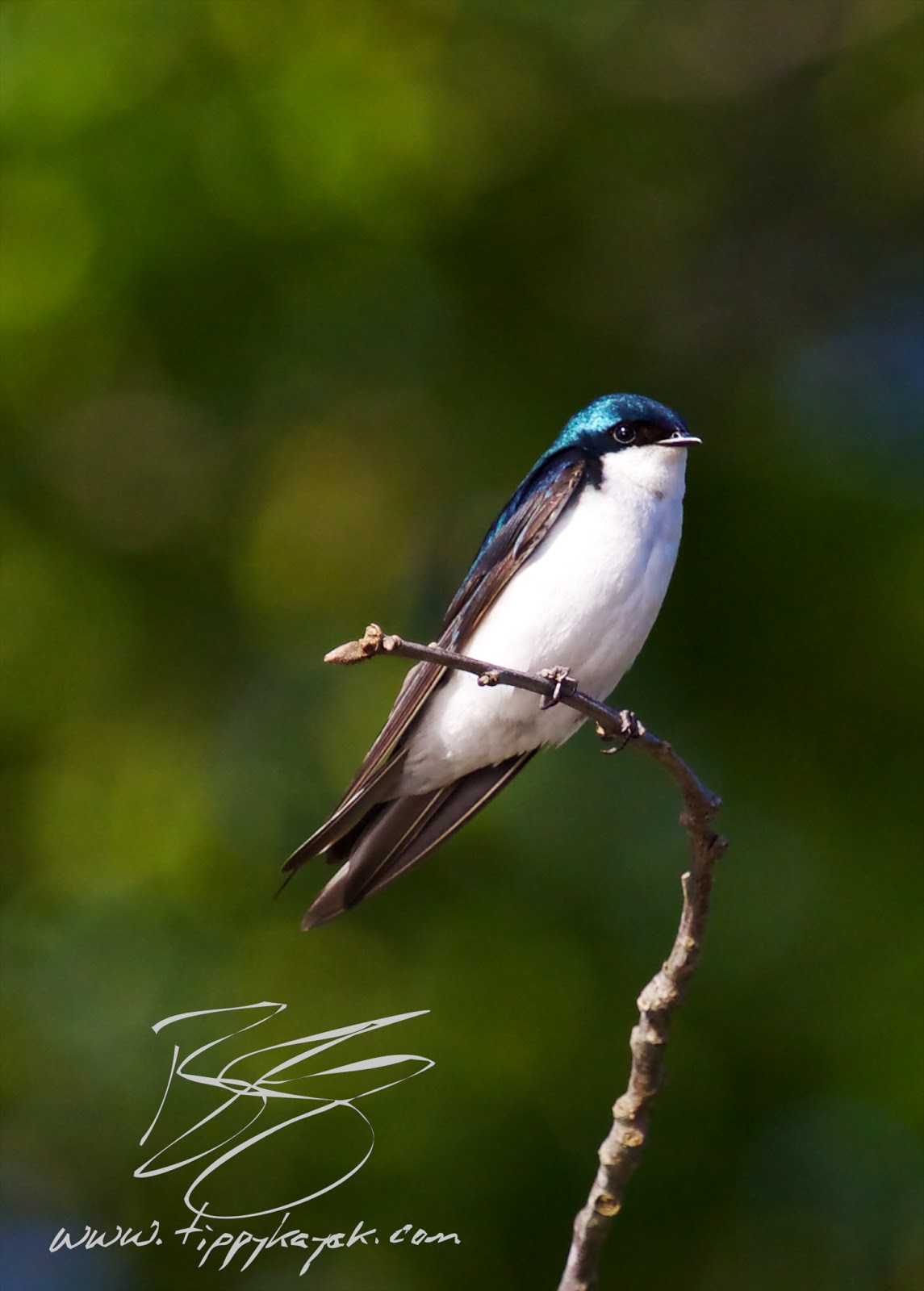 For some reason, there's something that really appeals to me about Tree Swallows. I like swallows in general, with their fast, agile flight and remarkable coloration, but over the years, the emerald and blue shimmer of the males as they streak by has always felt like a special event, and it sparks a little thrill of recognition, all the more heady because—though they're hardly rare—they're just infrequent enough to feel like a treat. Tree Swallows take the scientific name Tachycineta bicolor, from the Greek tachys, for fast and kineo, for move. The bicolor clearly refers to the stark contrast between the back and breast of the bird.

For years, I've tried to get this good a shot of a Tree Swallow, and today was the day. A male held his perch as I drifted by in my kayak, snapping dozens of exposures with a wild happiness that I finally—finally—got my shot. 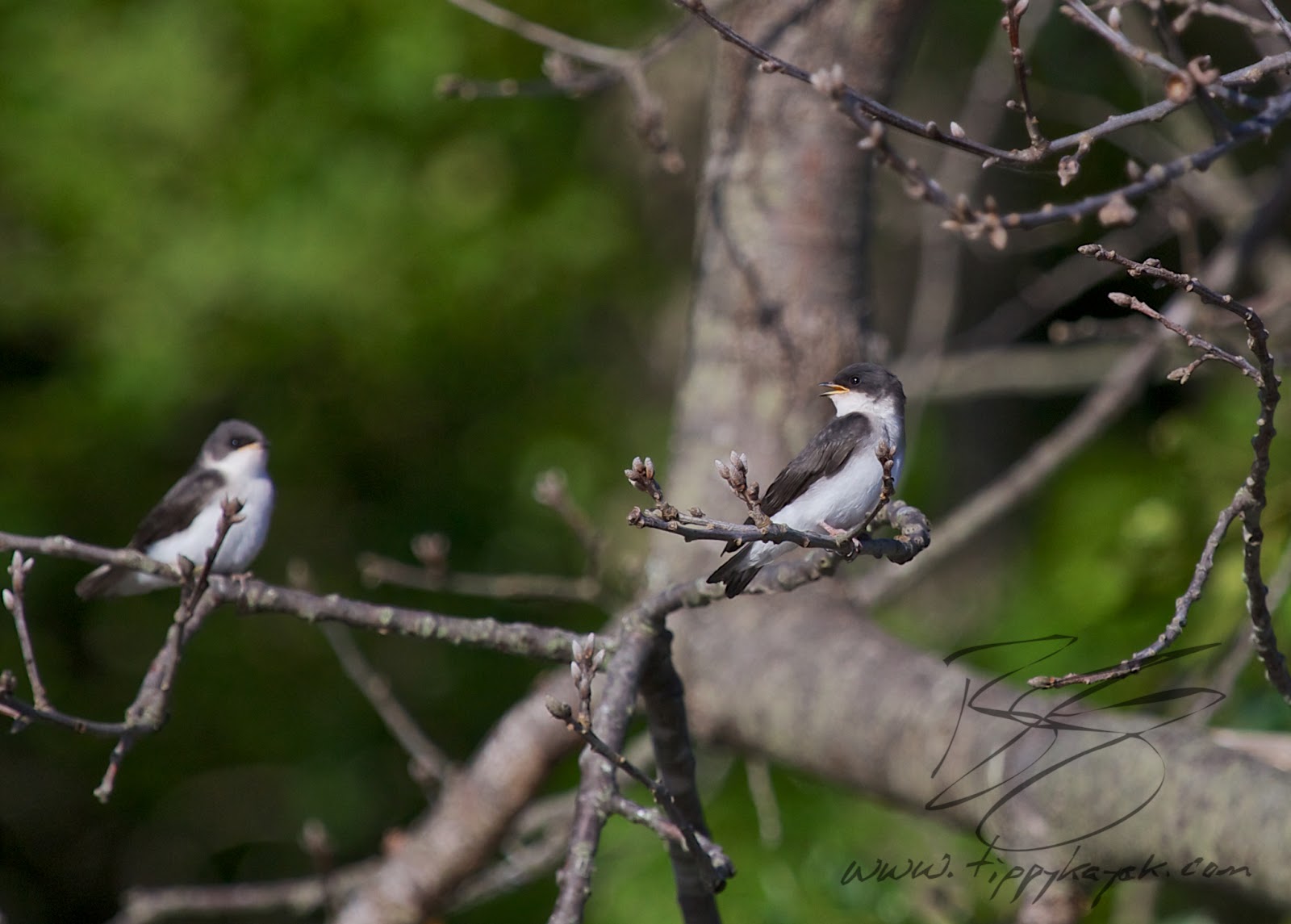 He may have been watching over these two fledglings. The differences between younger females and first year juveniles are pretty subtle, but I think the yellow gapes point toward juvenile. As females get older, they also tend to pick up some of the same iridescence and color and the males, and I don't see any of that on these two. 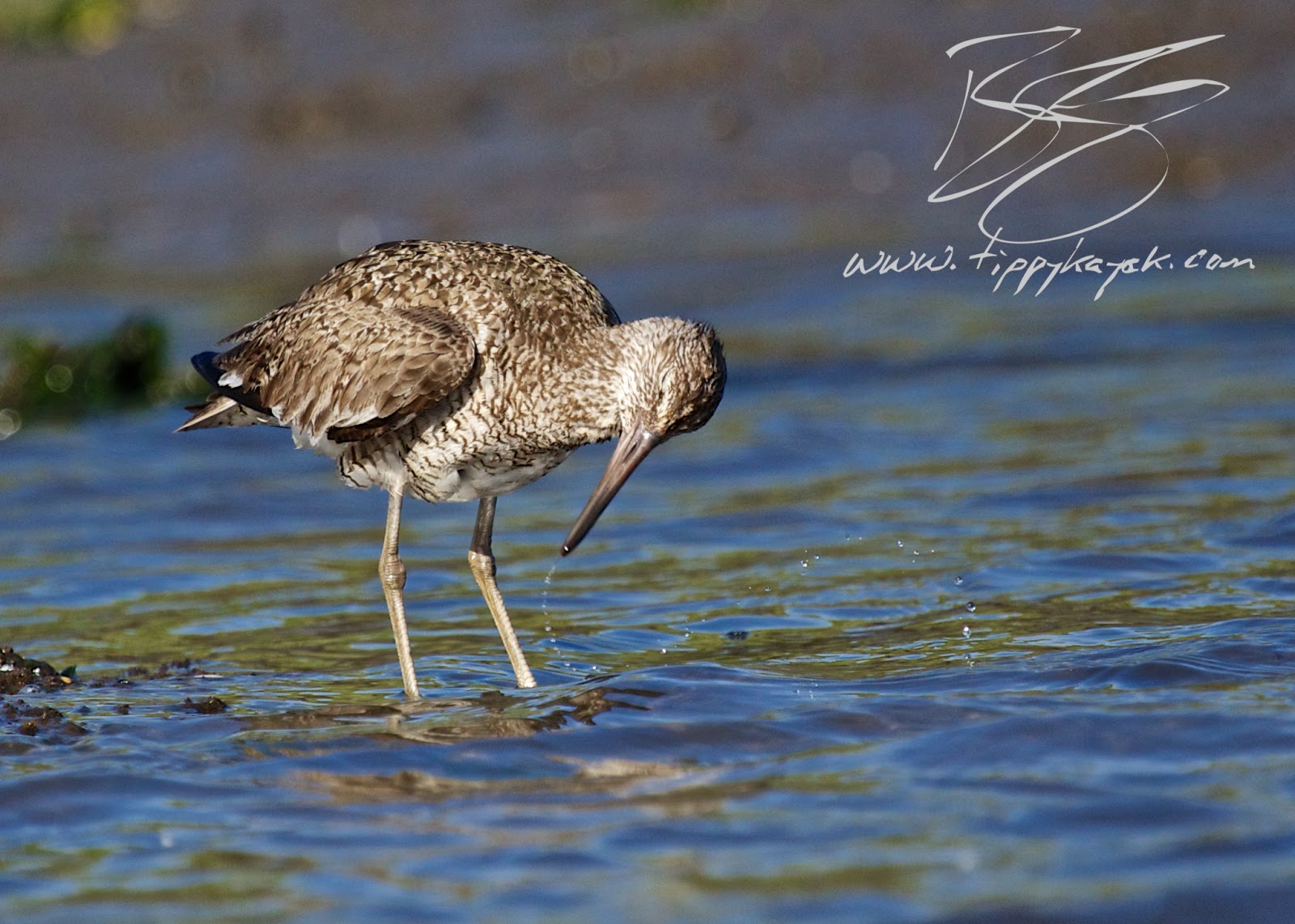 It was an extraordinary day for pictures. I had been working on a consulting project all day, and I had gotten so much done that I decided to reward myself with an evening paddle. The late day sun gives photos some wonderful color while still being direct and bright enough for the high shutter speeds necessary, say, to catch the water droplets off the beak of a Willet as it taps the surface of the shallows to grab a little moisture for preening. 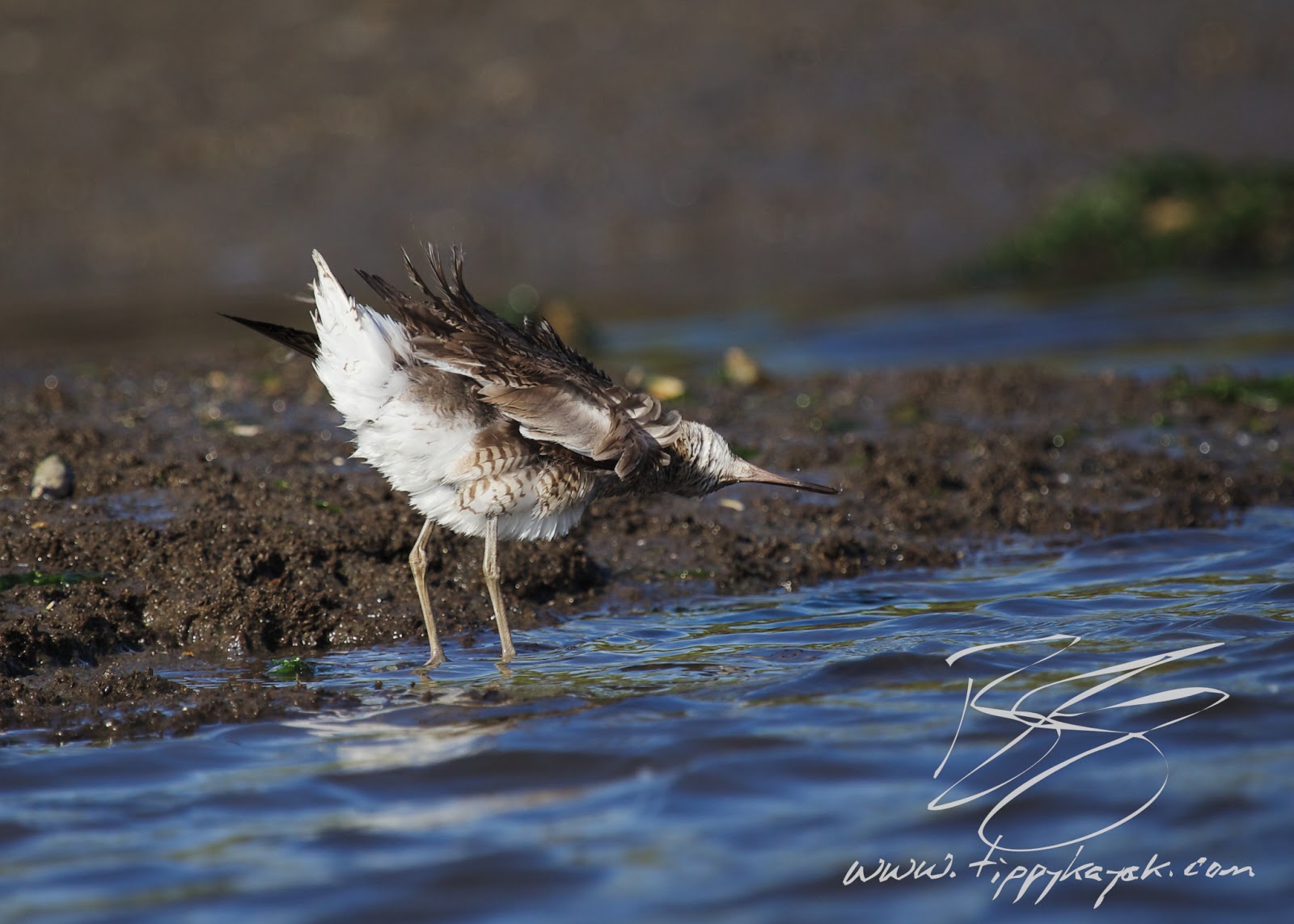 After dipping and preening several times, the Willet would shake itself vigorously, almost like a dog. It was adorable. 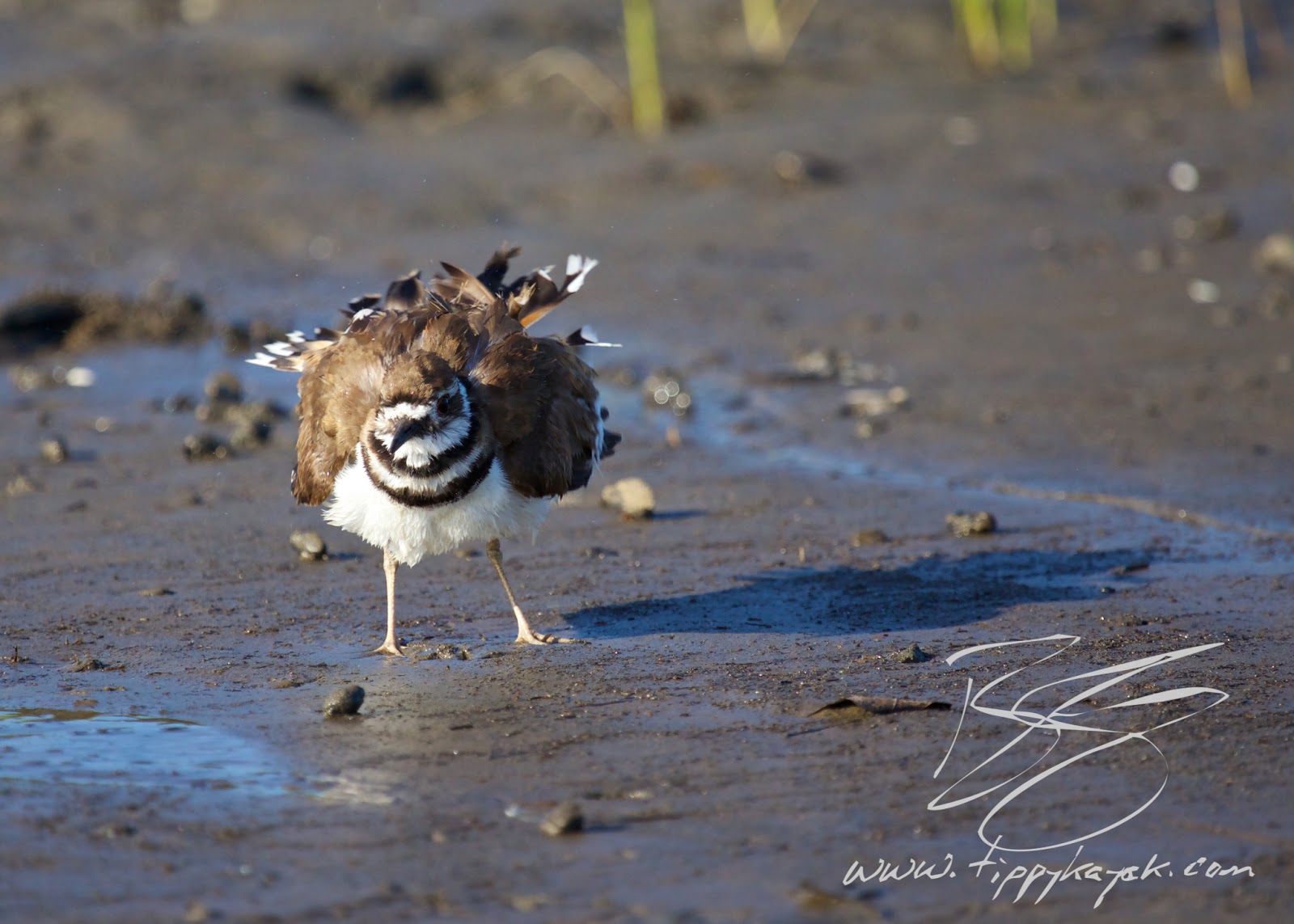 The Willets weren't the only birds bathing. This Killdeer was placidly preening and shaking as well and let me get surprisingly close. 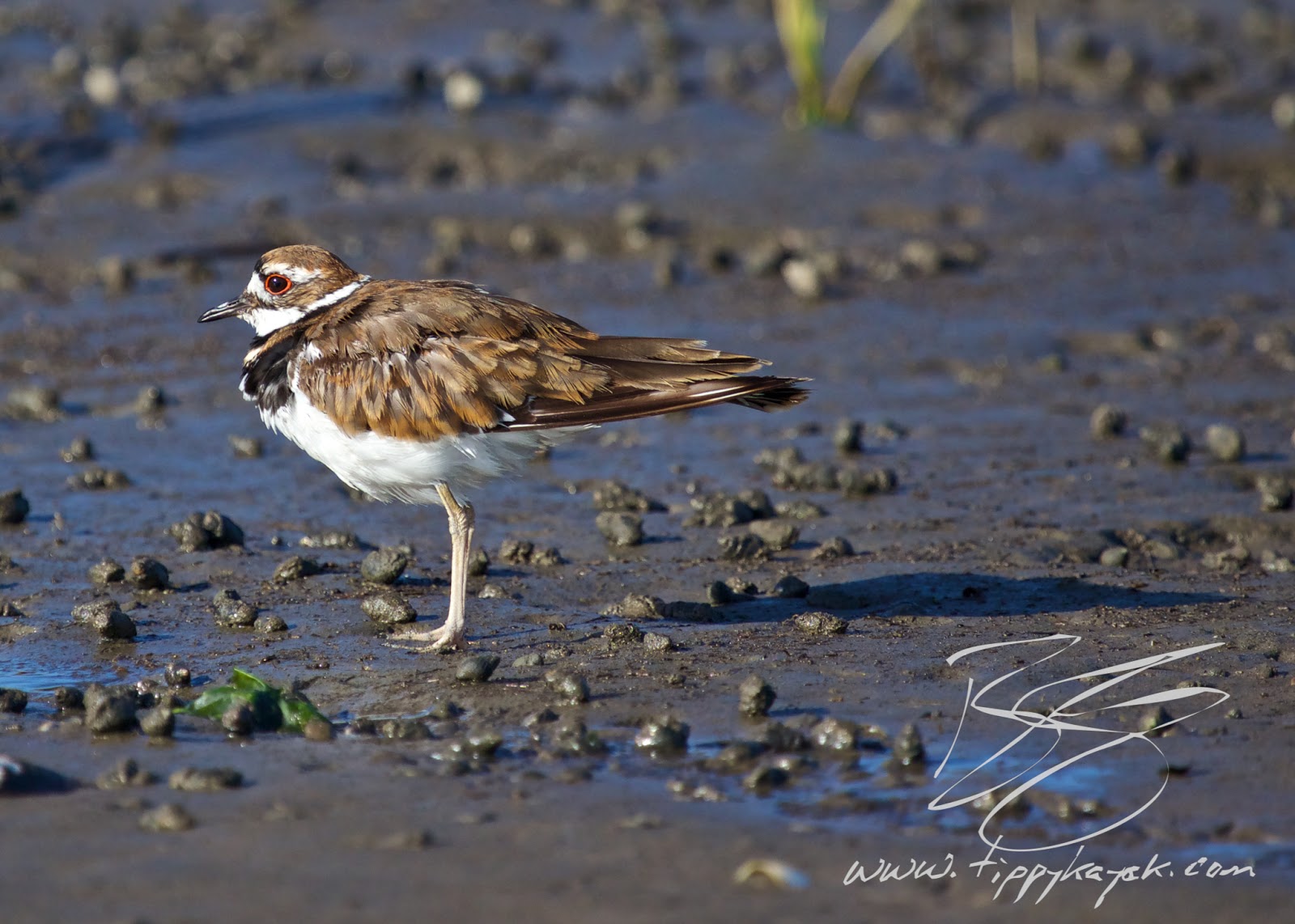 After the shake, the Killdeer looked a bit more typical for the species, but considerably fluffier. 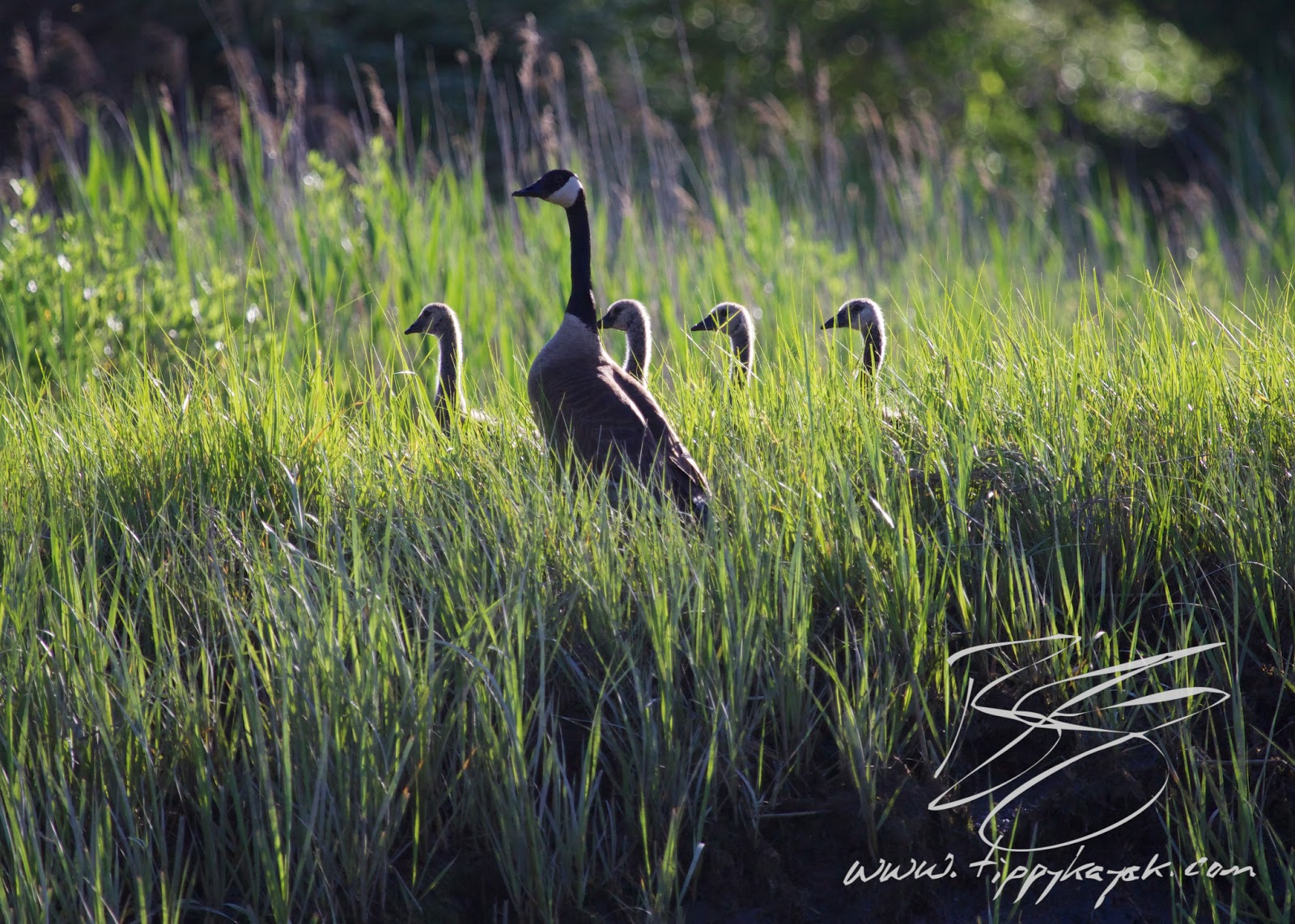 The wonderful light of a late summer's day allowed for some great compositional moments too, like the march of this family of Canada Geese up the bank of the river. 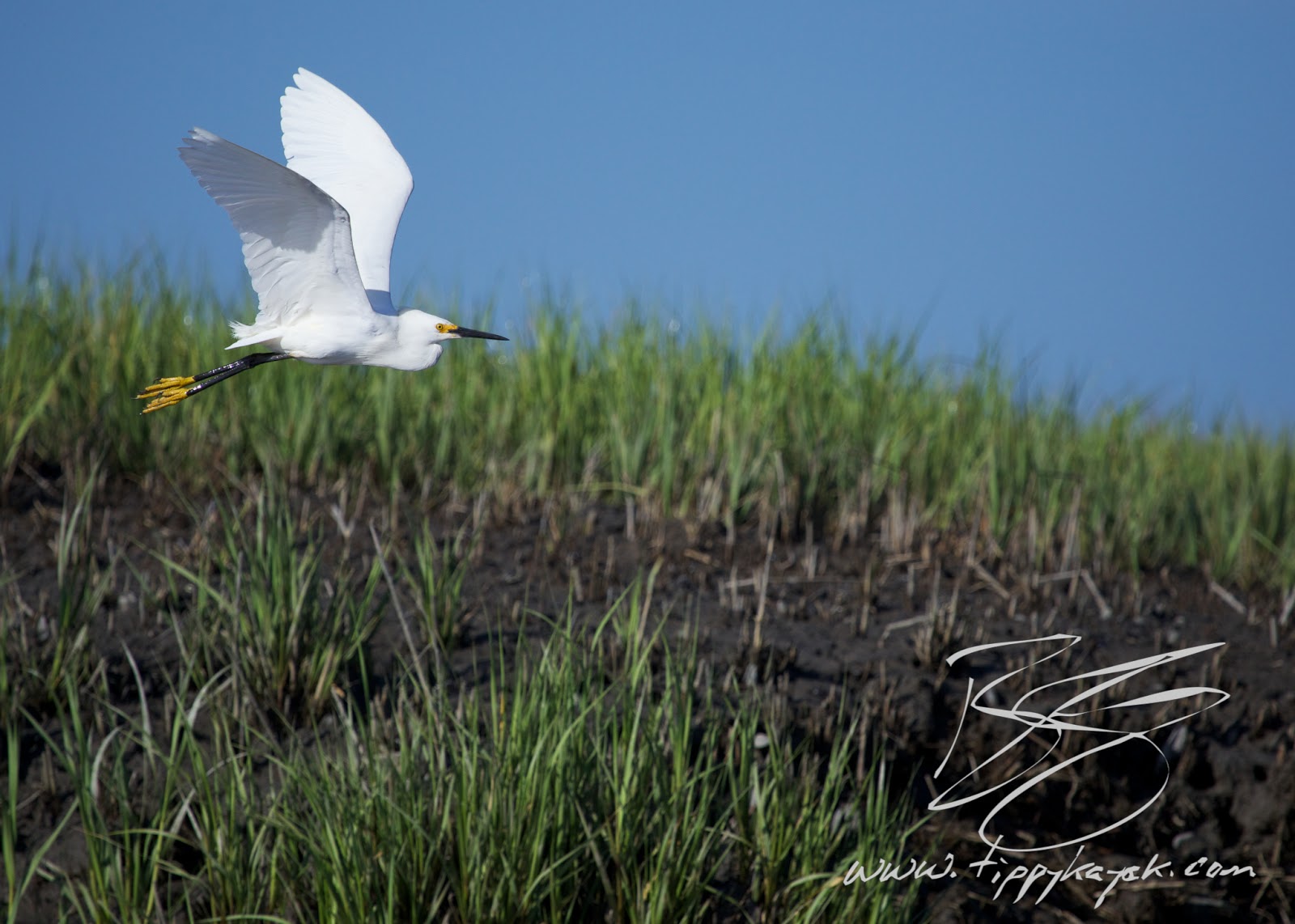 I've been trying to catch a Snowy Egret in flight ever since I got the new long lens. Exposure is a real trick with such a bright white bird. It's hard to get good detail on the white feathers themselves without underexposing the scenery. Overexpose it, and the bird washes right out. I think I did pretty well here. 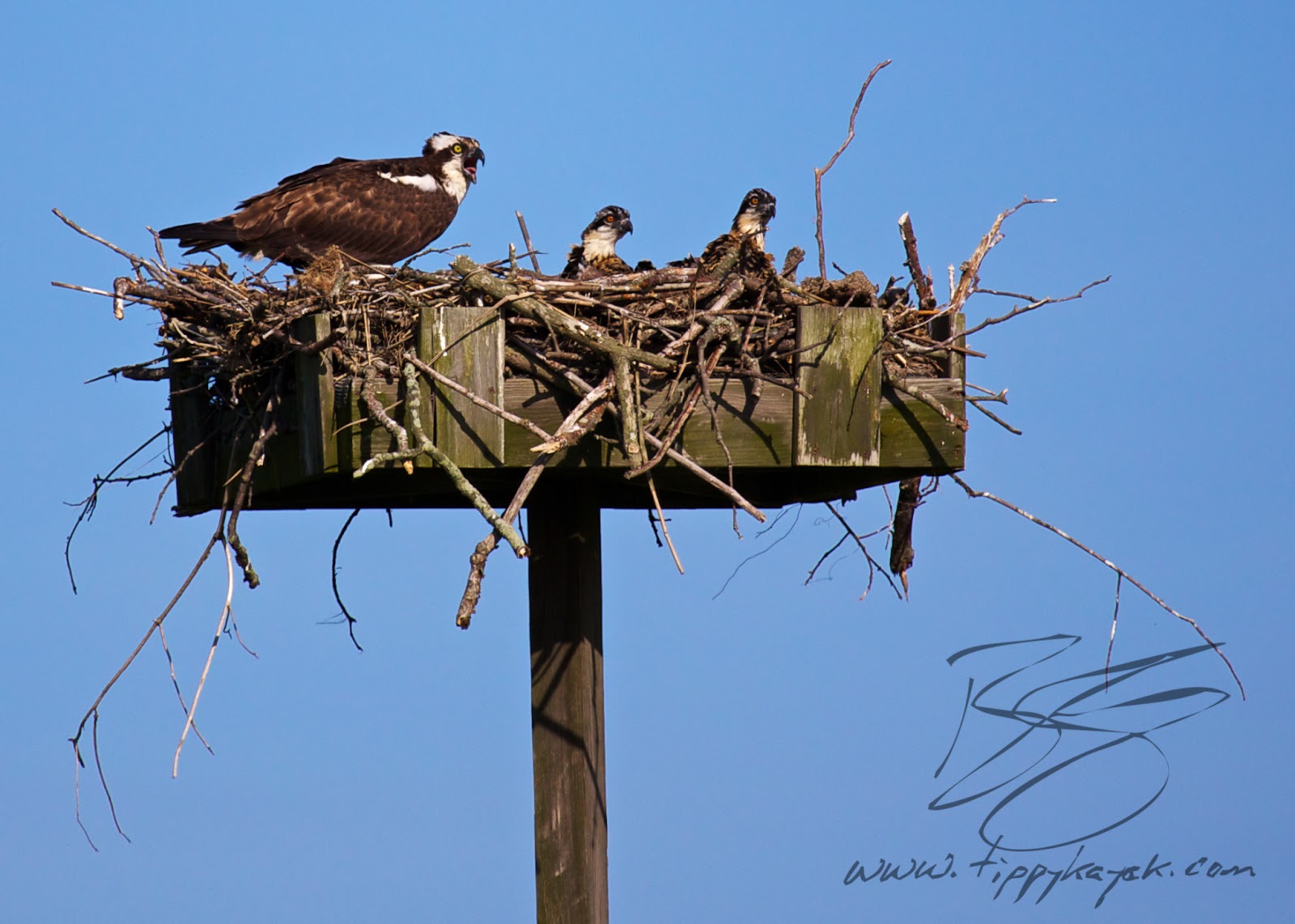 I was out for about two hours. I went a bit over three miles up the river and then back. That means several close passes with Osprey nests. This particular river is wide enough that I can pass without really disturbing the birds. In this shot, for example, the adult is making an alarm call at another Osprey, not at me. 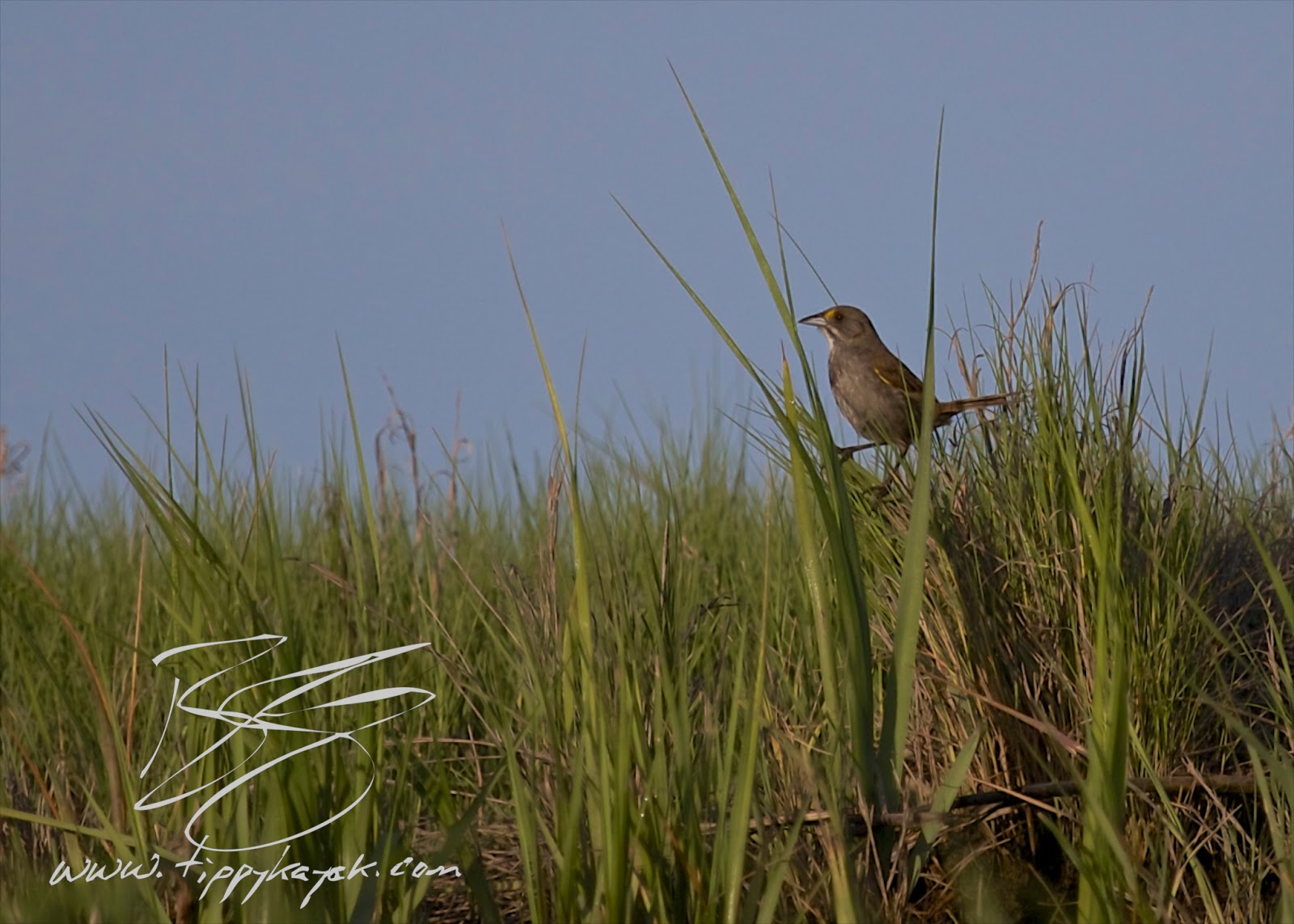 At first, I thought this was a Saltmarsh Sparrow, but when I reviewed the shots, I realized that what I had a was a Seaside Sparrow. If the calls were any indication, there were literally dozens in the reeds for this one I could see and photograph. 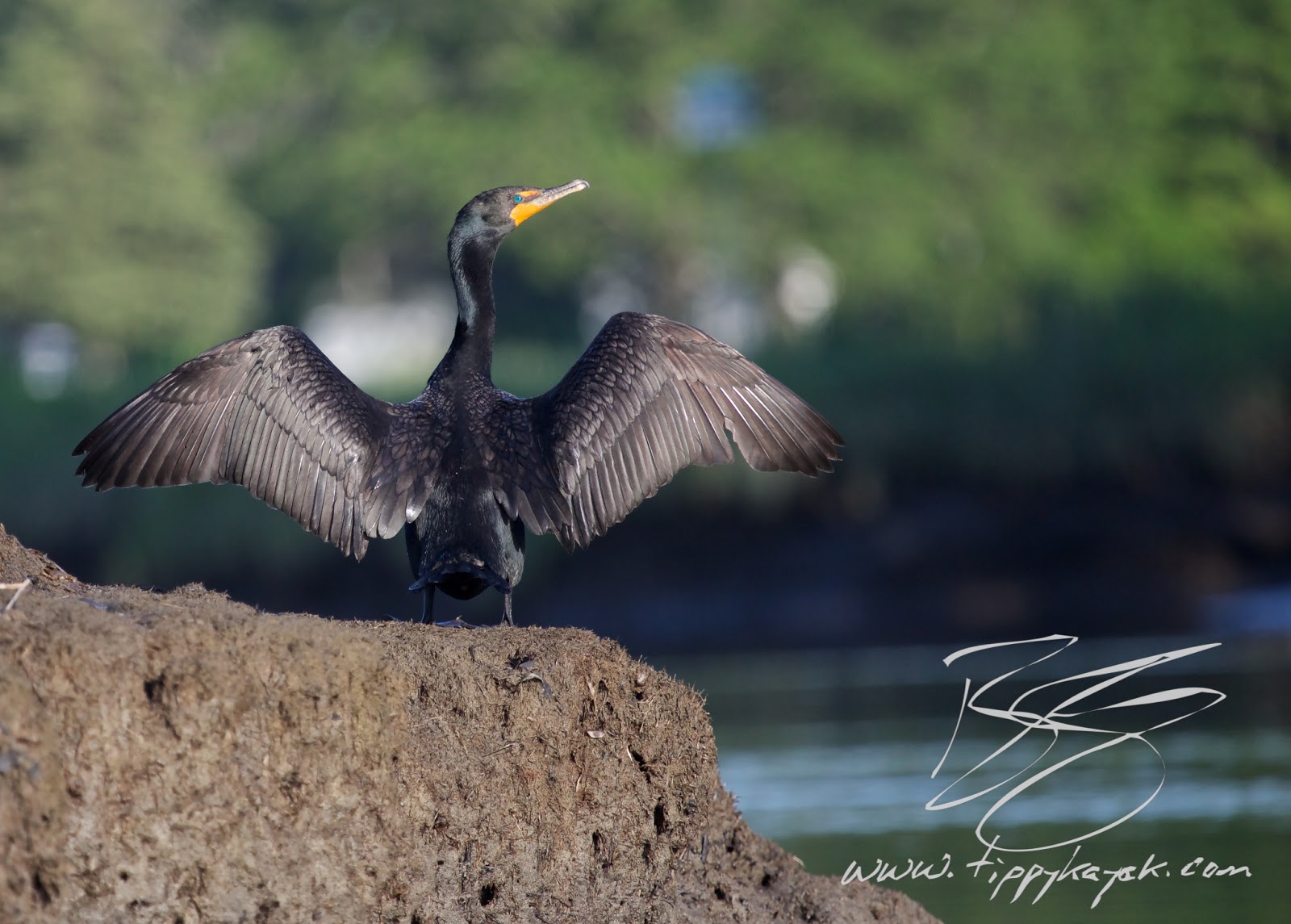 Double-crested Cormorants aren't hard to get a shot of any day, but today, even the most ordinary birds were offering entertaining behaviors and compositionally interesting shots. It was a very, very good outing.
Posted by Brian at 7:00 PM 3 comments: 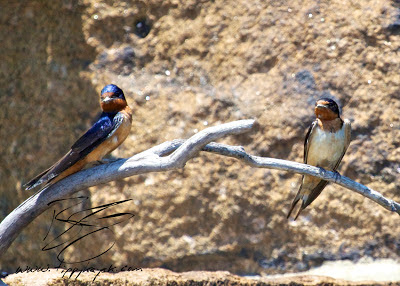 This morning, I went for a walk and family photoshoot on the Trolley Trail with Ben and Jen and their kids. The Trolley Trail is a favorite spot of ours, and there are two places at which it crosses open water on the salt marsh.

So this afternoon, I decided to take the kayak and explore under the Trolley Trail for the first time.

It turns out some of the little bridges are ideal habitat for cooperative Barn Swallows. 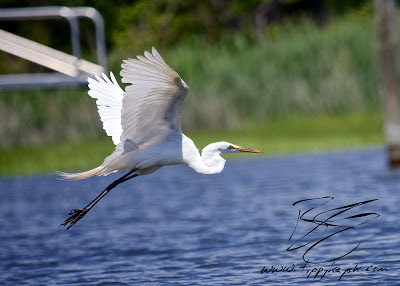 The navigation got tight at times in the inlets, and I ended up hauling out some fancy strokes like bow-ruddering to pivot the kayak around the corners in the light current produced by the outgoing tide.

This Great Egret was easy pickings once I get back to the open water. They line the edges of the inlets and occasionally pick themselves up and switch to a new, more promising fishing spot. 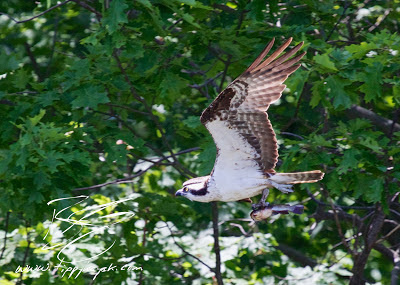 I also had an opportunity to get close to some Ospreys. It's actually hard to keep an appropriate distance in a couple of spots on the narrow, long salt marsh inlets, so I ended up quite close to this particular bird and his catfish as he was looking for a place to stop and snack near his nest.

At another nest, I ended up spooking the nesting bird, which I hate to do, but the inlet simply wasn't wide enough for me to get any farther away from the nest as I passed. The bird left the nest, made one territorial display circle, and returned to it, so I shot back over my shoulder as she landed again. 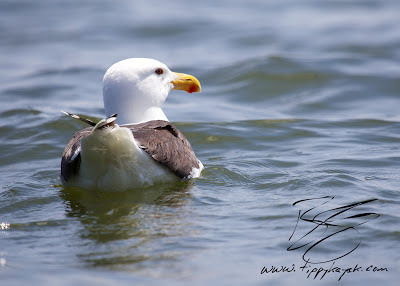 I don't typically take pictures of gulls, but I believe this one is a Great Black-backed Gull, and it's a very striking bird.

Even though I got other great shots today, my favorite is this one below, of cooperative Barn Swallow who let me drift very, very close, to the point that I maxed out the minimum focal distance of my lens! 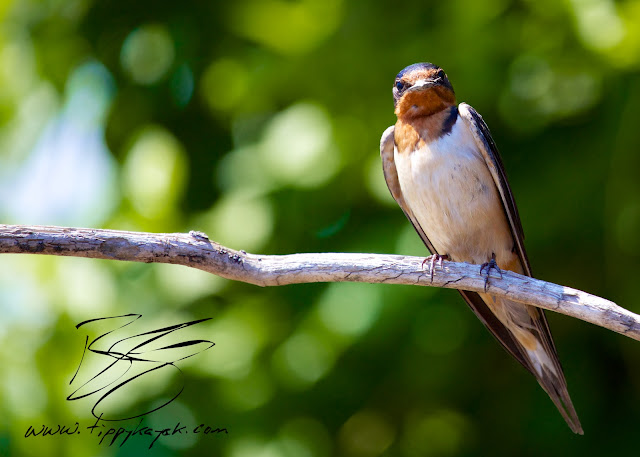