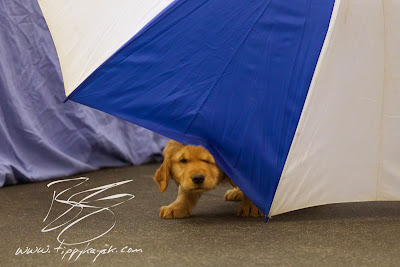 I had the opportunity over the weekend to be the photographer for a very special gathering. A terrific litter of Goldens was being evaluated to decide which families should be matched up with which puppies.

When a responsible breeder produces a litter, that person typically has a goal for the puppies, and that's often the key distinction between a backyard breeder,which you want to avoid like the plague, and a hobby breeder, which is where you should get a purebred dog if you decide to go that route for your canine companion. A hobby breeder is somebody who has a competition dog hobby, like formal obedience, hunting, agility, or conformation showing. They produce dogs that can compete in that venue. For pet owners, that means an opportunity to get a dog who isn't being bred for profit and who has the qualities you want in a purebred.

When somebody breeds purely for profit (or just willy-nilly because they have a boy dog and a girl dog and they want more), they're probably not doing anything to protect and encourage the qualities that attract you to the breed in the first place. When somebody breeds with a goal in mind, they choose a breed that can meet that goal, and they make matches to produce dogs that can do it even better. Competing also helps prove that the dogs have the abilities that you want in your dog, like biddability, stable temperament, and the desire to retrieve.

In this case, that meant pairing up an obedience champion father and an obedience competitor mother. The resulting eight puppies were destined for obedience and family homes, so the breeding team evaluated them periodically as they grew, trying to figure out which would be the most intense personalities, which more laid back, as well as a host of other factors that they use to try to predict a pup's future personality and ability. 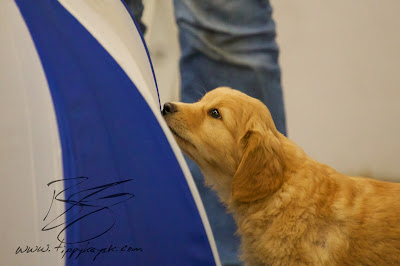 Today, as a last step in evaluating them, the puppies all went through the Volhard puppy test. It's not a perfect measurement of a puppy's personality, temperament, and working ability, but it's a helpful benchmark as you try to decide what puppy might best best for a family with kids, which one might be best for competition obedience, and which might be best for some other scenario.

As you can see, an umbrella is used to determine if the puppies startled at a visual stimulus, and to see how fast they recovered. 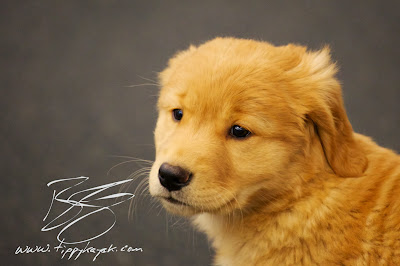 It really pushes you to ask questions about what's nature and what's nurture in a puppy's behavior and working ability.

While I found the test fascinating, I also truly enjoyed the chance to catch such a wide range of expressions on eight different gorgeous Golden puppies. 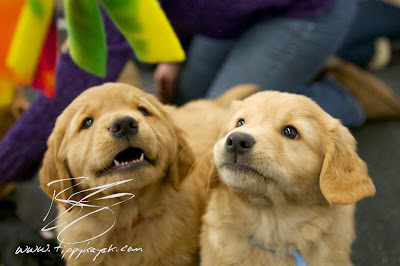 After the testing, we put the puppies in a large pen with the potential owners who were there to give their input on choices. That really gave me a chance to grab candids of the pups and to play with them myself.

While I wasn't there to pick out a puppy myself, little Blue Boy (on the right in this shot) won me over bigtime. I loved his attitude and spunk. 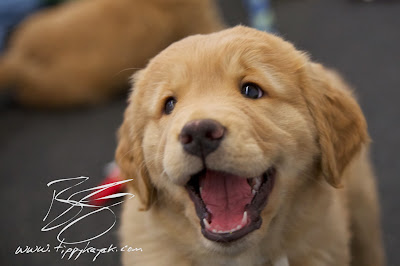 White Boy, though, was one of the most photogenic, making some of the silliest faces during our playtime. 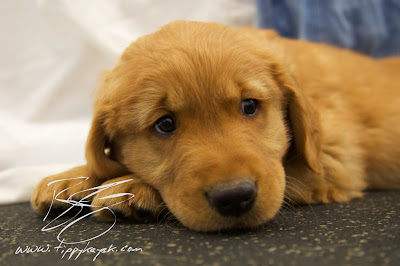 After several hours of playing, meeting new people, hearing new sounds, being temperament tested, and playing around with brothers and sisters, the puppies started to crash and doze.

For me, it was a great learning day to get into the head of ethical breeders and the way they match up puppies and owners. And it's just plain fun to get on the floor with eight Golden puppies.
Posted by Brian at 5:00 PM