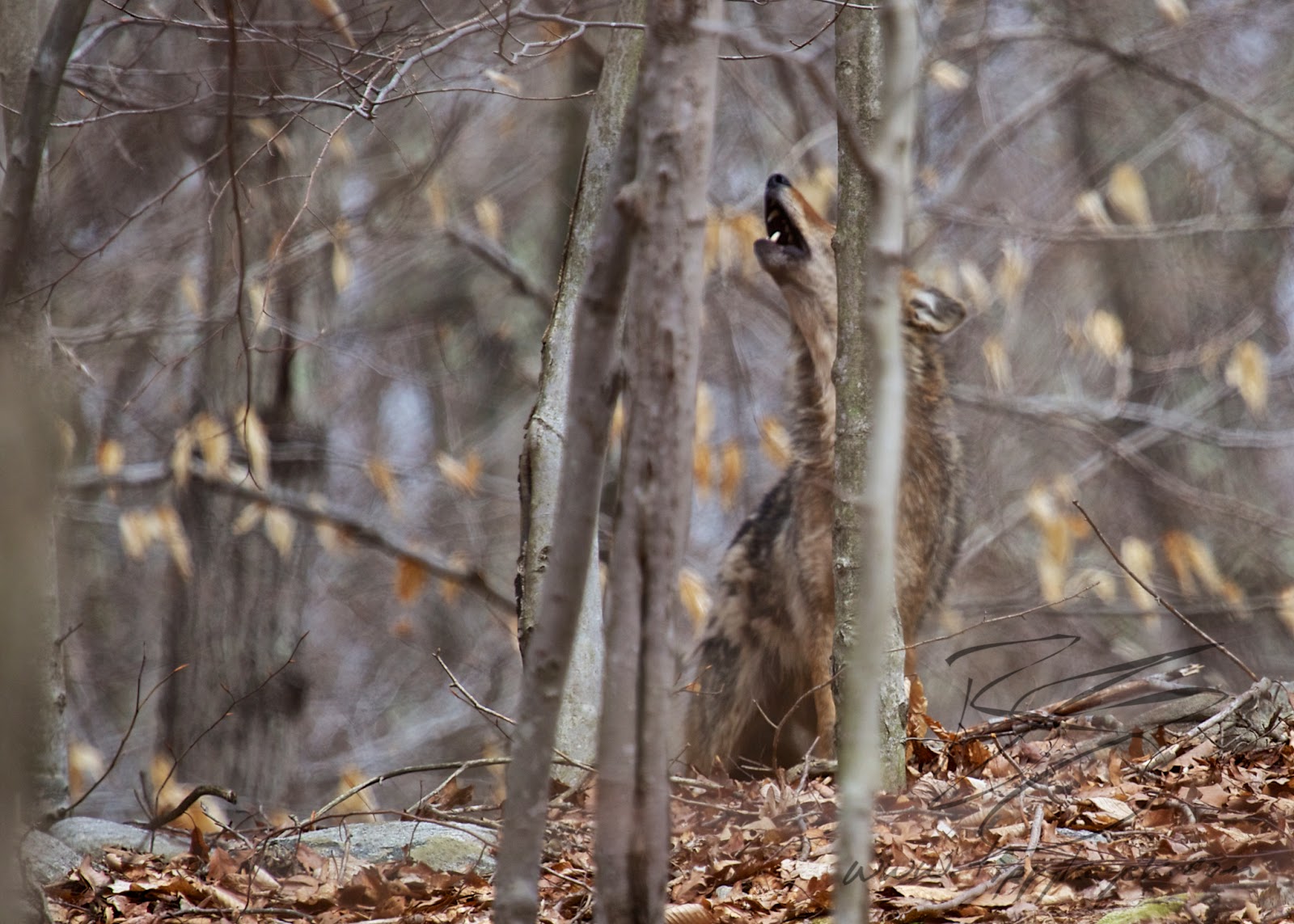 I've been looking for the old-growth forests in Guilford's East River Preserve ever since my friends moved to Guilford and found it. It's pretty huge, so there's a ton I haven't seen. Today, I took the dogs and went looking for those old oaks and poplars but found something quite different. Yes, that's a coyote. 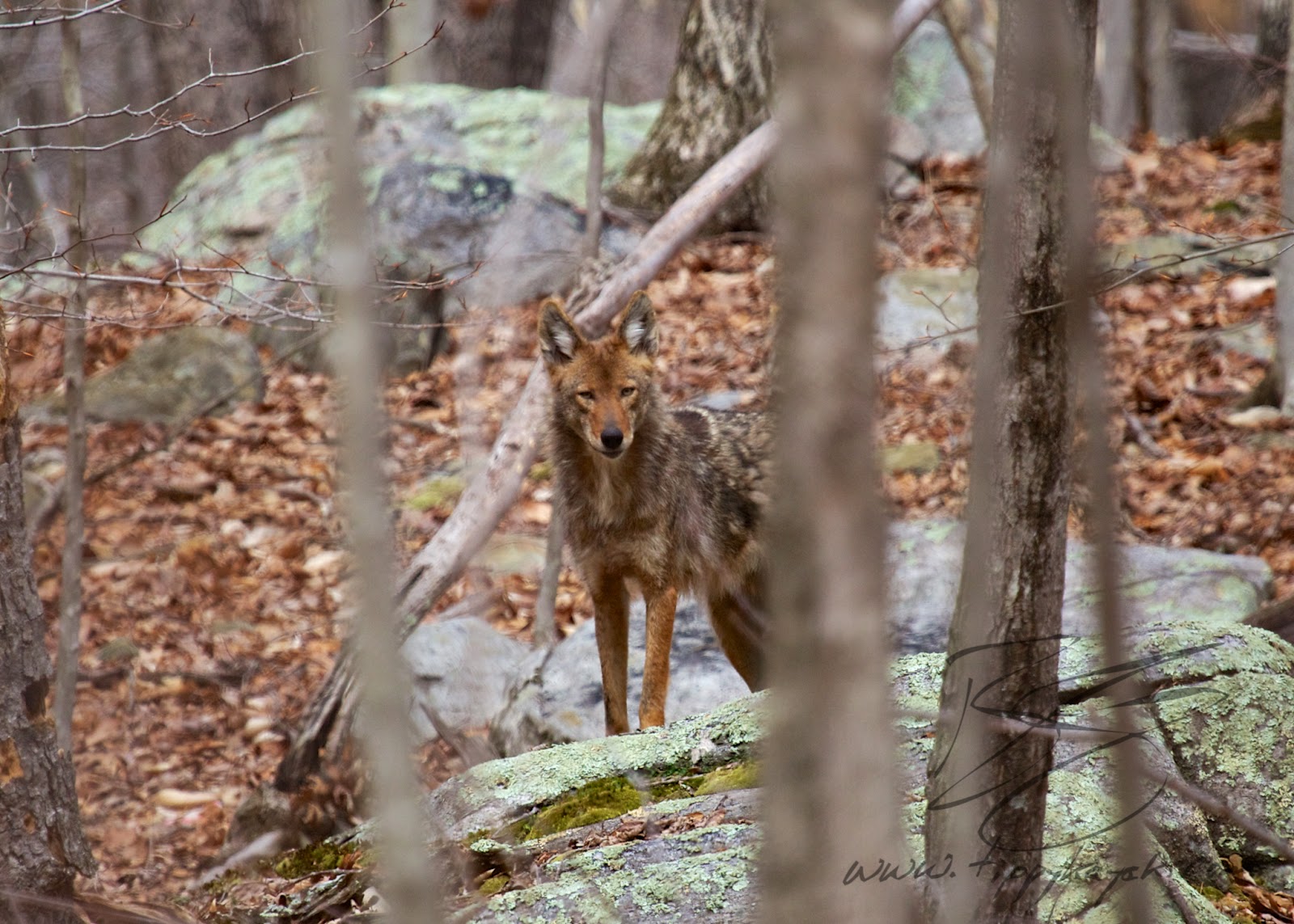 About 90 minutes into our hike, there was an explosion of movement and barking about fifty feet off the left side of the trail. I quickly gathered the dogs to me, quietly thanking all the work we put into reliable recalls.

The dogs both have a lot of practice around reactive dogs, and both of them seemed to think the coyote was simply a loud, angry dog, so they wrote her off as boring pretty quickly. So I put them in a sit-stay and grabbed some exposures. 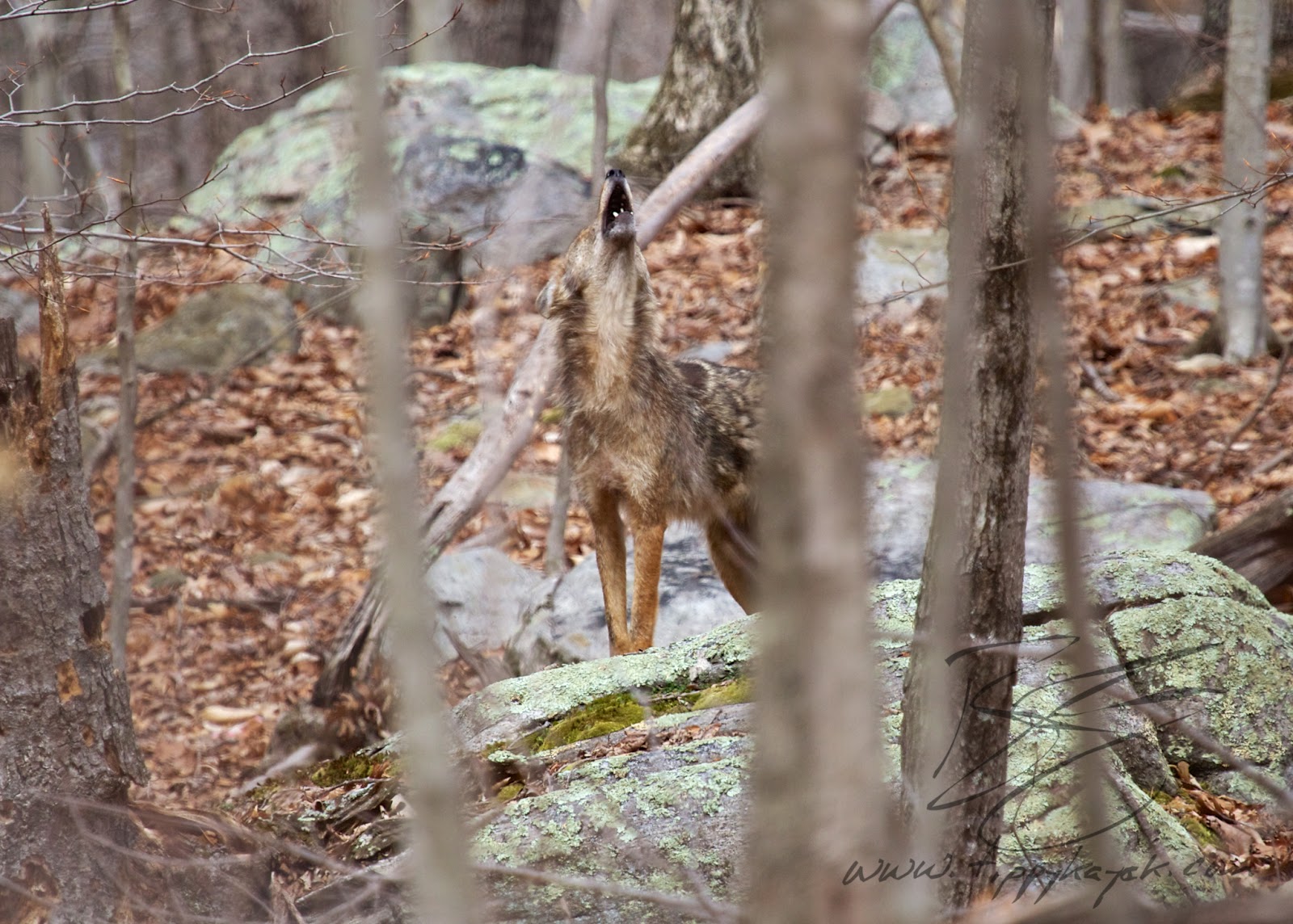 Then I tried to walk up the trail with the dogs right by my side, hoping that she was simply being territorial and would stick to her area and let us leave. However, the coyote started to pace us, always keeping her distance, but definitely not leaving us alone. She barked and howled and stayed near us. 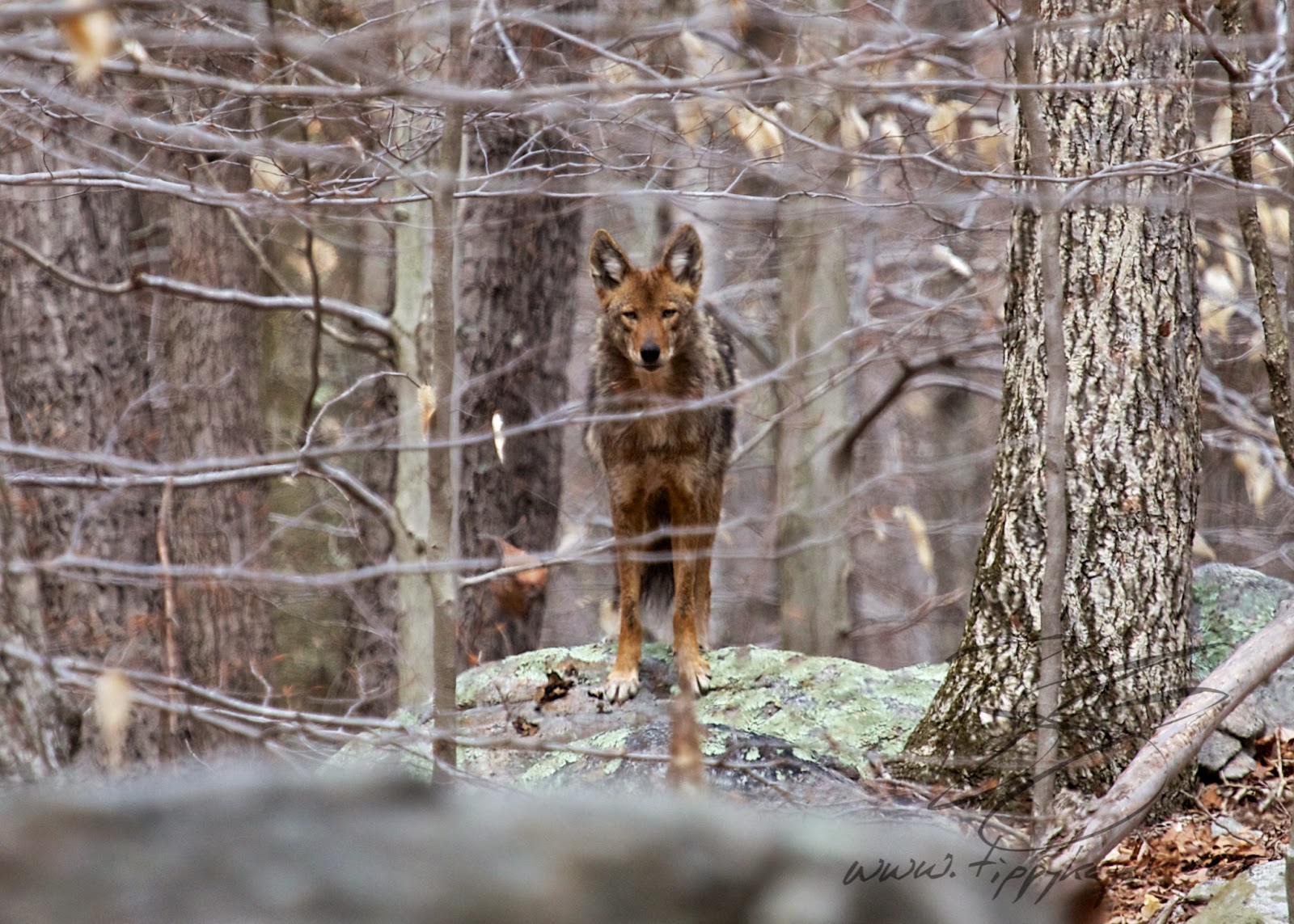 After about a quarter mile of this, she ended up ahead of us on the trail, so I made a judgement call that it might be easier to leave her territory by backtracking rather than forging through. Sure enough, after we passed the original spot where we surprised her, she stayed where she was and barked at us as we retreated.

It was a bit more excitement than old growth tulip poplars, I'll tell ya.

In retrospect, what we saw must have been defensive behavior from a mother with new pups. This is exactly the right time of year for a coyote to have young pups, and between the ratty fur on the coyote herself and the really uncharacteristic, confrontational behavior around a specific area, the simplest explanation is that she was in a den with her pups when we surprised her. Her behavior was an attempt to draw attention away from the den and drive us out of the area.

Coyotes do move their pups several times before they're mature enough to fend for themselves, so hopefully she immediately found an area farther from a main trail and relocated them right after we left. As scary as she was, I'd rather share the woods with an animal this beautiful and complicated than disrupt her or endanger her pups.

Let me end with this video of her as she warned us off. It was taken through a 400mm lens, so she's farther away than she looks. While I did stop twice to figure out which way to walk to get away from her with the least amount of confrontation, and I took pictures both times I stopped, at no time did I walk towards her or otherwise create any more disruption or confrontation than I had to. These animals are wild, even when you find them in your backyard. You risk injury to yourself when you move closer to get photos, and an animal that injures a human is typically culled by local authorities.

At the time, I didn't realize that there were probably young pups involved, so if I had unthinkingly left the trail to get closer for better pictures, I might easily have gotten too close to the den. This otherwise shy animal might have had no choice but to attack me or the dogs. And even if you don't get hurt, a human presence can significantly disrupt an animal's regular behavior, which in a situation like this could result in the death of the pups.  If there's a lesson here, it's one of respect for nature, to walk softly and carry a long lens.