Reader Question: What should a kid do if the parents hit the dog?

I tweet about dog training once or twice a day on Twitter, and the following was recently tweeted at me: 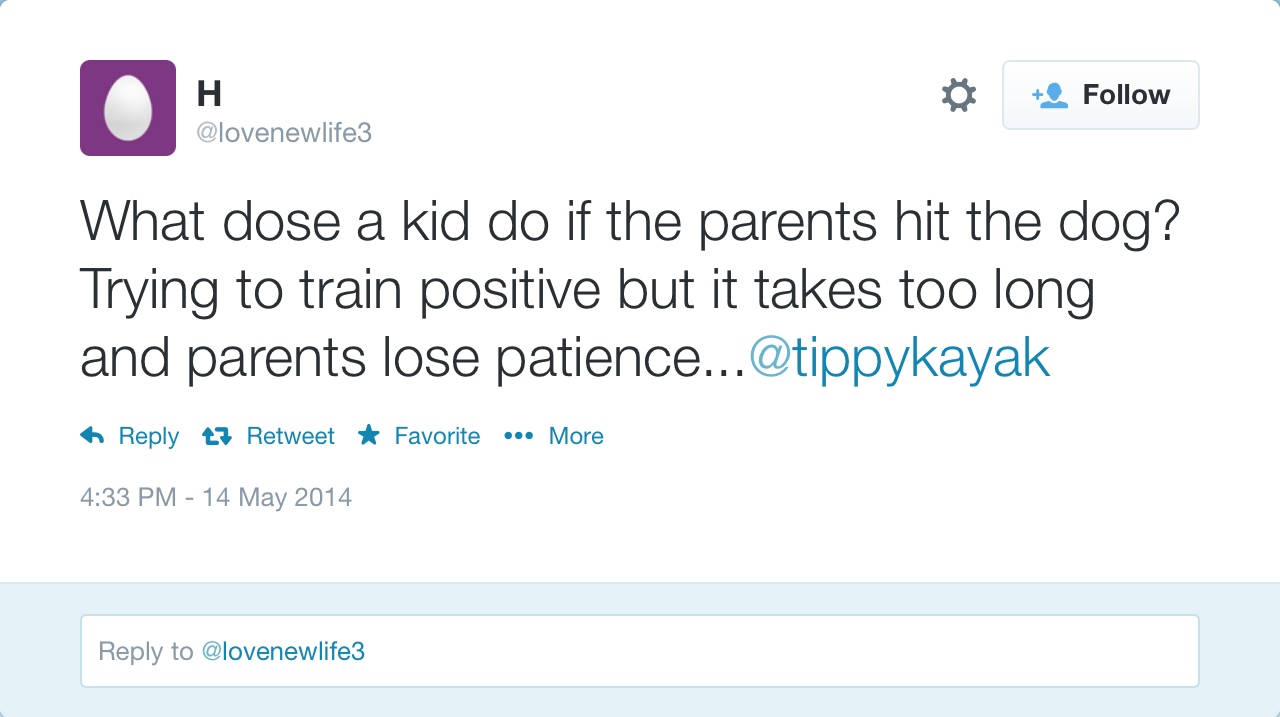 Rather than just tweeting back, I felt like the subject needed its own full-sized article, because it's an issue that I never considered before and a really important one.

I think the first thing I need to say—and this is really important—is that it's not your fault if your parents hit your dog. Your tweet doesn't say whether it's the more mainstream kind of hitting, like the poking or cuffing you see some old-fashioned trainers do, or a kind of full-force hitting we'd consider truly abusive. Both aren't good ways to train a dog, but the second situation is much more serious and dangerous.

Either way, though, the child in a family isn't responsible for controlling or changing the actions of the adults. I'm going to offer some advice here about some things you can try, because I can tell this is really important to you and I admire the fact that you want to take some action, but you have to remember that this isn't your fault and you can't necessarily change it.

The first thing you can do is show your parents that essentially all of the highly respected professional organizations of dog trainers, dog scientists, vets, and behaviorists agree that physical punishment is ineffective. They don't have to take your word for it.


Hopefully, they'll be swayed by the fact that these highly-respected professional organizations of experts have such strong statements about the side effects of using physical force to punish a dog. Maybe your folks grew up in an era and a place in which hitting dogs was more acceptable and normal, but we know more now. Lots of us trained differently ten or twenty years ago and have followed the research to newer, more effective techniques.

My guess is that your parents want to do right by your dog and they feel this is just how you train. But my hope is that you can show them these resources and they'll learn that there are much more effective ways to train a dog that don't carry the potential side effects of aggression.

I also noticed that your tweet says that they think training positive "takes too long," but I would make the point that dog-friendly training is actually a lot faster and more reliable than hitting a dog. In fact, your tweet is kind of proof that the hitting isn't working, since your parents are still having to do it. If it worked, they'd do it once or twice and then move on, right?

So not only is it potentially dangerous, but it's also an ineffective way to change the behaviors you don't like. Physical force lacks the clarity of teaching and rewarding a dog, and punishment doesn't create as long lasting behavior as positive reinforcement does.

I'm not sure what problem behavior is leading your parents to hit your dog, but hopefully there's already an article on it here in the dog training section of Puppy Tao (problem behavior articles are down towards the bottom of the page). If there isn't, tweet at me again with some more details, and I'll write one. If you can't convince your parents to try a gentler way to train the dog, maybe you can work on the behavior yourself to try to improve it.

Regardless of the outcomes, remember most of all that this isn't your fault and it's not your job to solve it. As a kid, there are some strategies you can employ to try to change your parents' behavior a little and to train the dog yourself, but at the end of the day, the adults are responsible for what goes on in the house and the kid simply doesn't have the power to change everything, even if the kid is right and the parents are wrong. A couple of decades ago, it was a lot more normal to hit dogs as part of their training, and your parents may simply be in that mindset. We've learned a lot since then, though, so hopefully they can do some reading on faster, more reliable, more dog-friendly ways to teach a dog and make him a safe, happy companion.

Give your dog a treat and a ten-minute training session for me. And keep up the good work!
Posted by Brian at 5:00 PM