High Summer in the Meadow 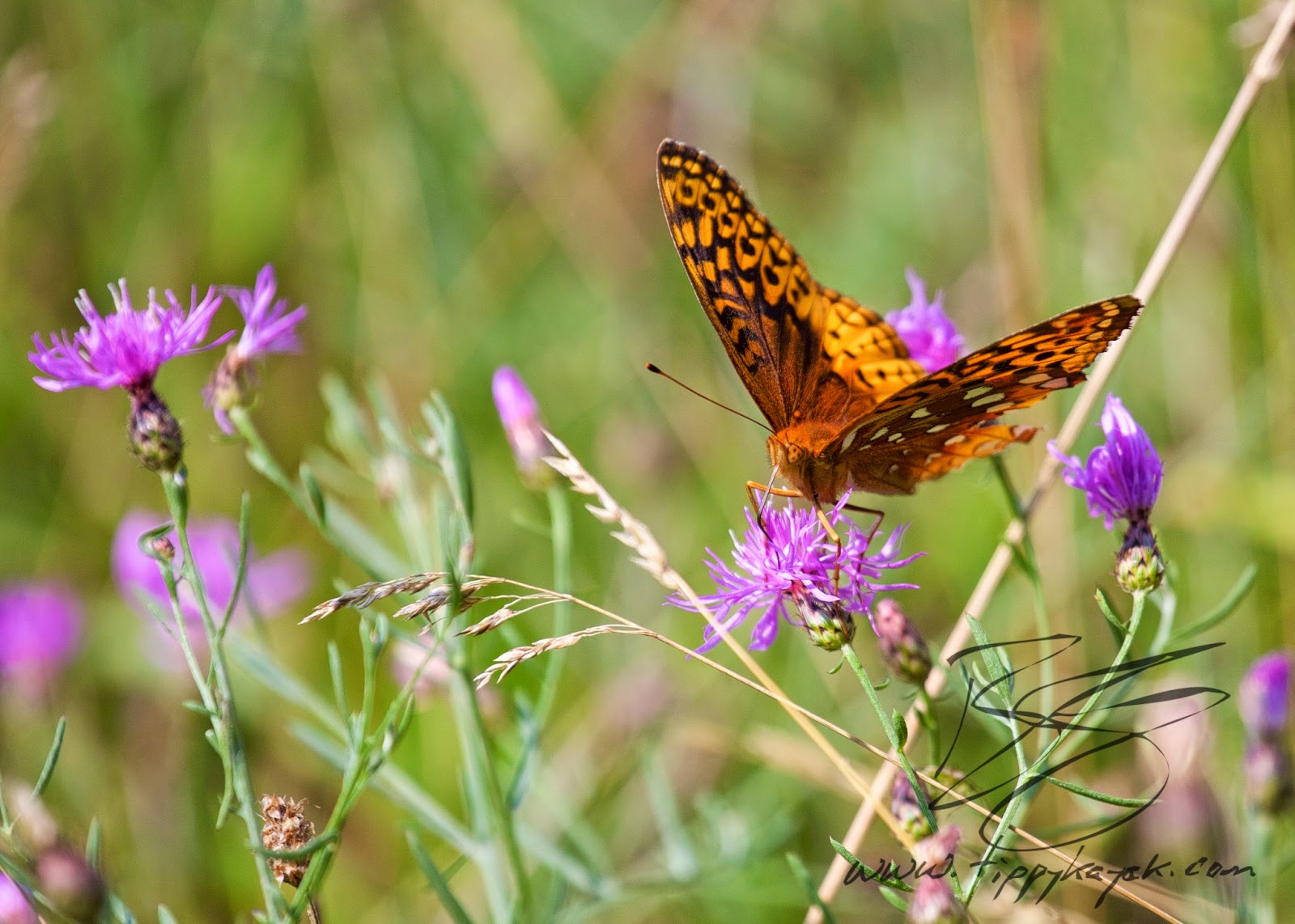 This was a rather busy summer, work-wise. My consulting job kept me as busy as I was willing to be, so my days consisted of waking up, drinking coffee, working, and finding an escape around lunchtime before heading back to work for the rest of the afternoon.

One of my favorite summer spots is the meadow at the East River Preserve in Guilford; at this time of year, it's full of wildflowers, butterflies, and swallows. 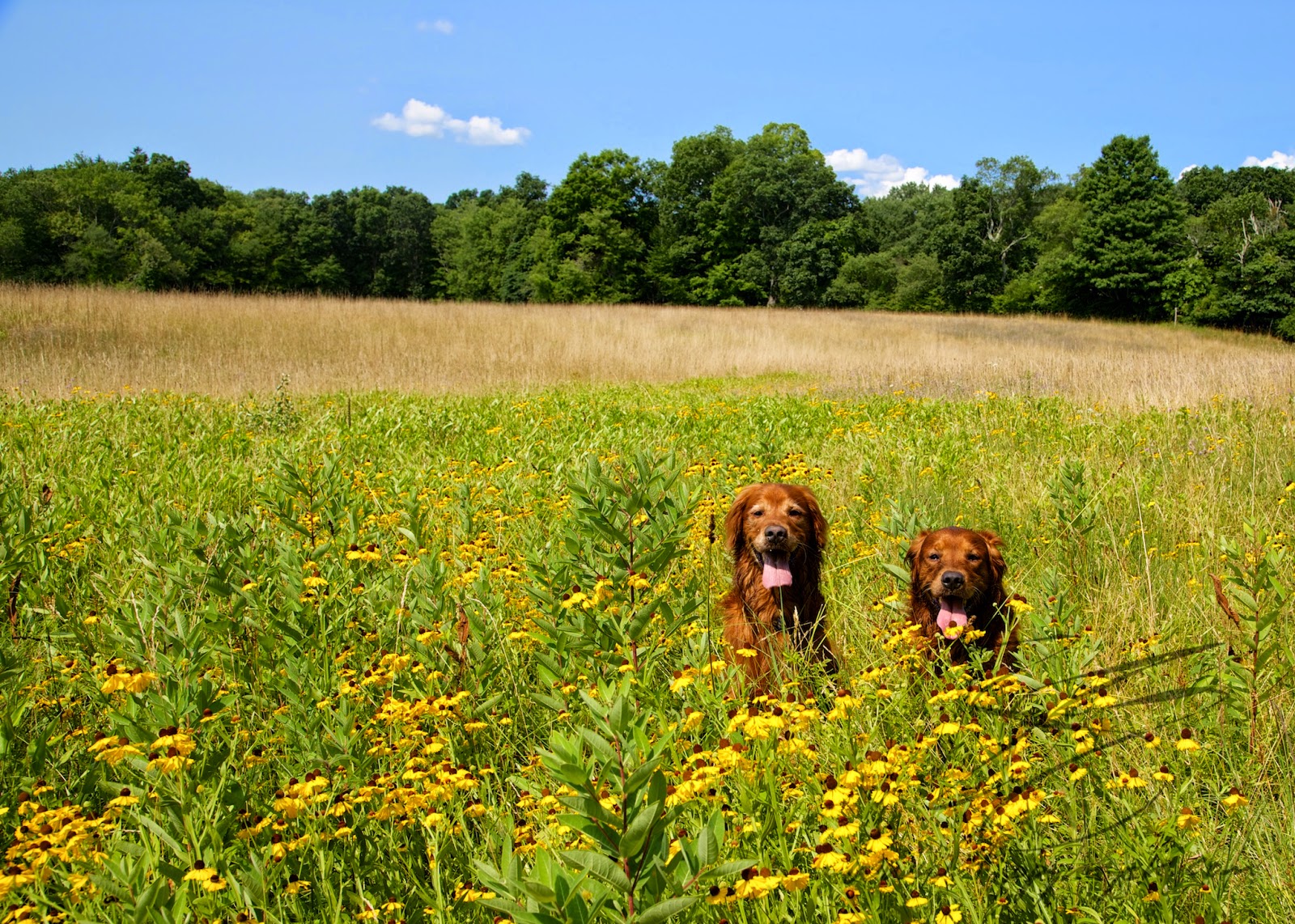 It's also full of Comet, Jax, and me for an hour or two while we traipse through the meadow and the woods to clear our heads before turning back to work again.
Posted by Unknown at 11:00 AM No comments: 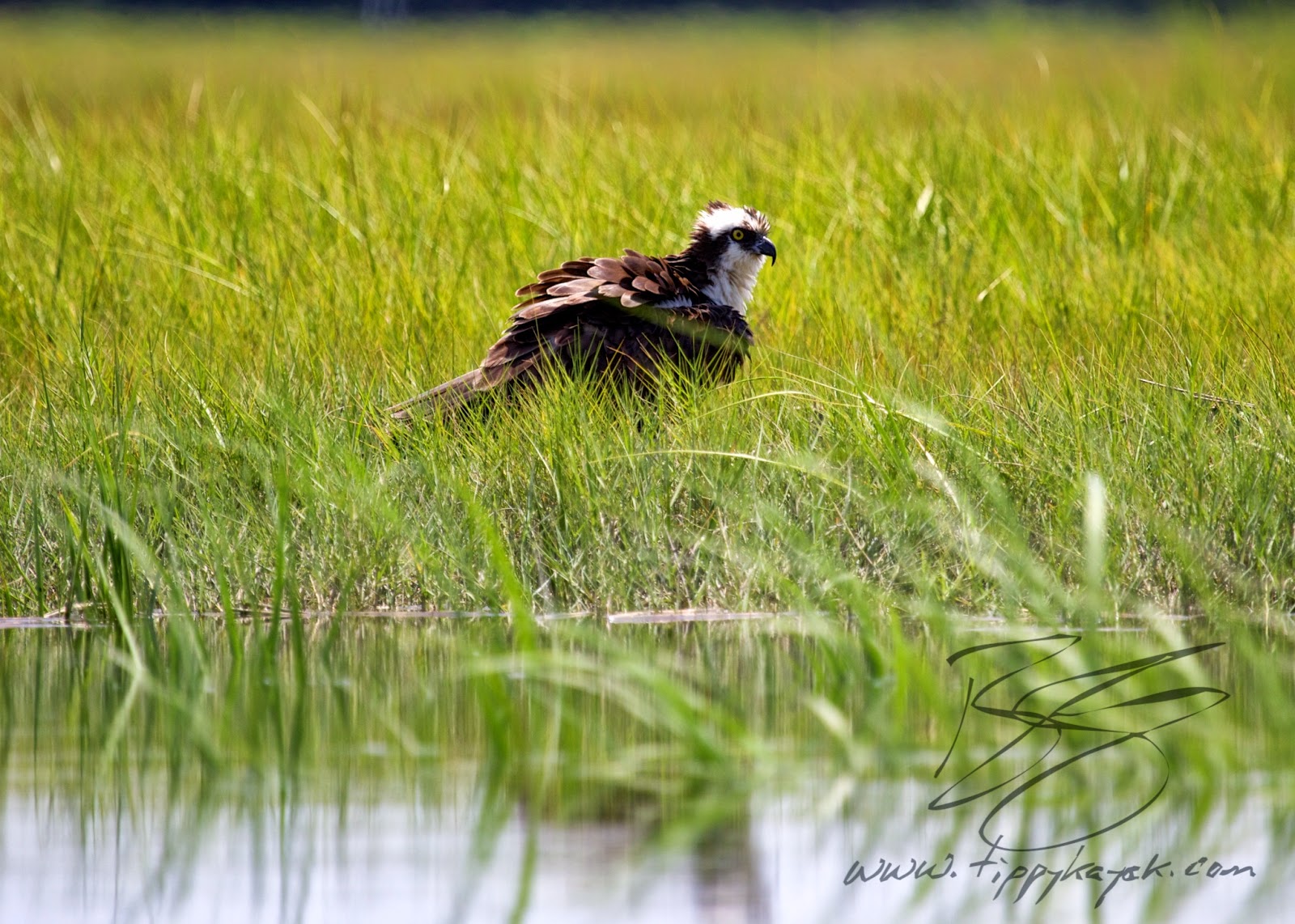 The date and time of this post reflect when I took these pictures, but I'm actually writing and posting in November. I've had some laptop trouble and a ton of work, and that's resulted in a huge backlog of photos and entries.

However, I do have some good stuff, like these Osprey photos from one of my only kayak outings this summer. 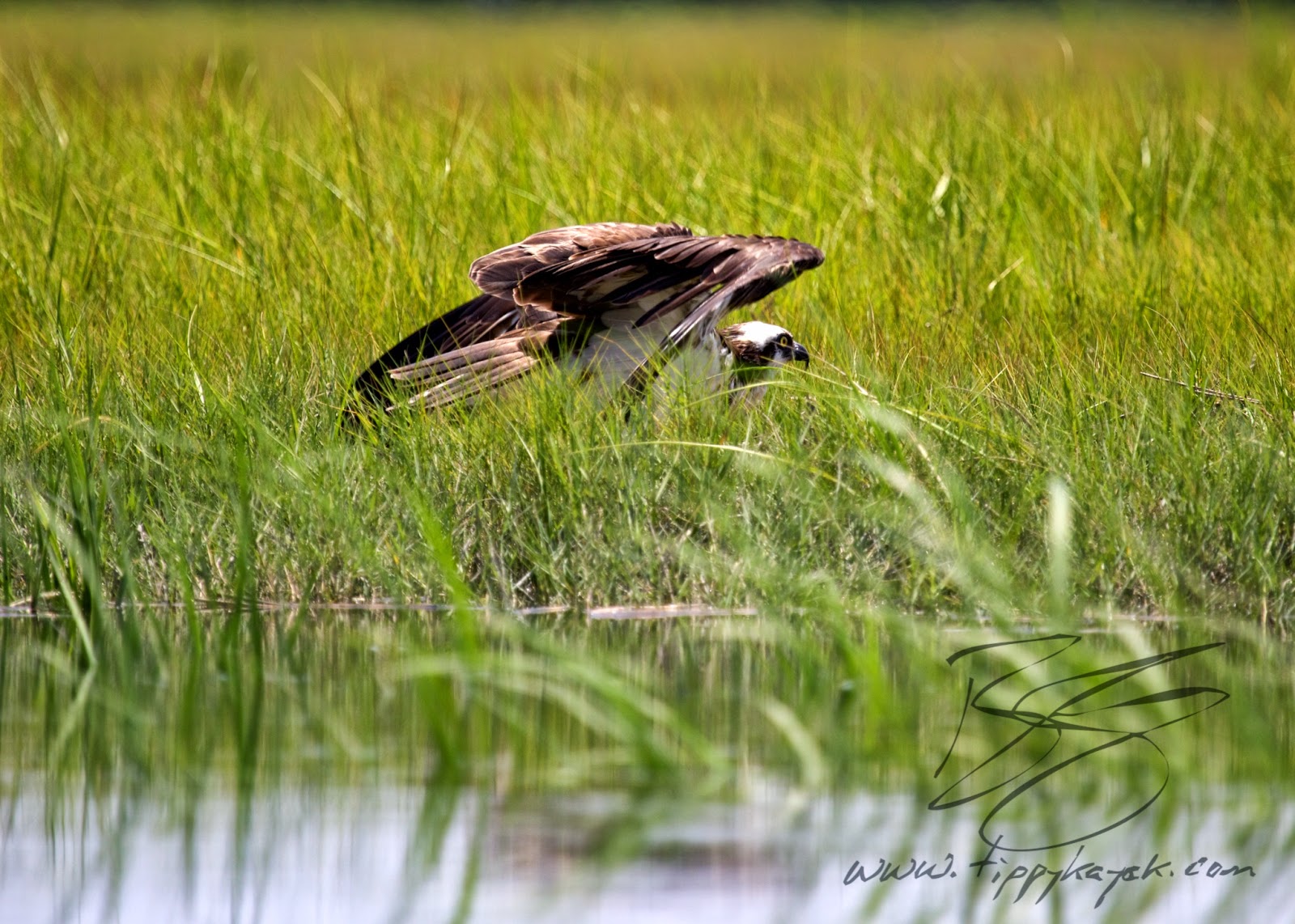 During July, there are a lot of Ospreys jockeying for fish and territory, and in the heat of midday, many rest on the low ground.  I caught this one just as he finished his rest and took back to the air. 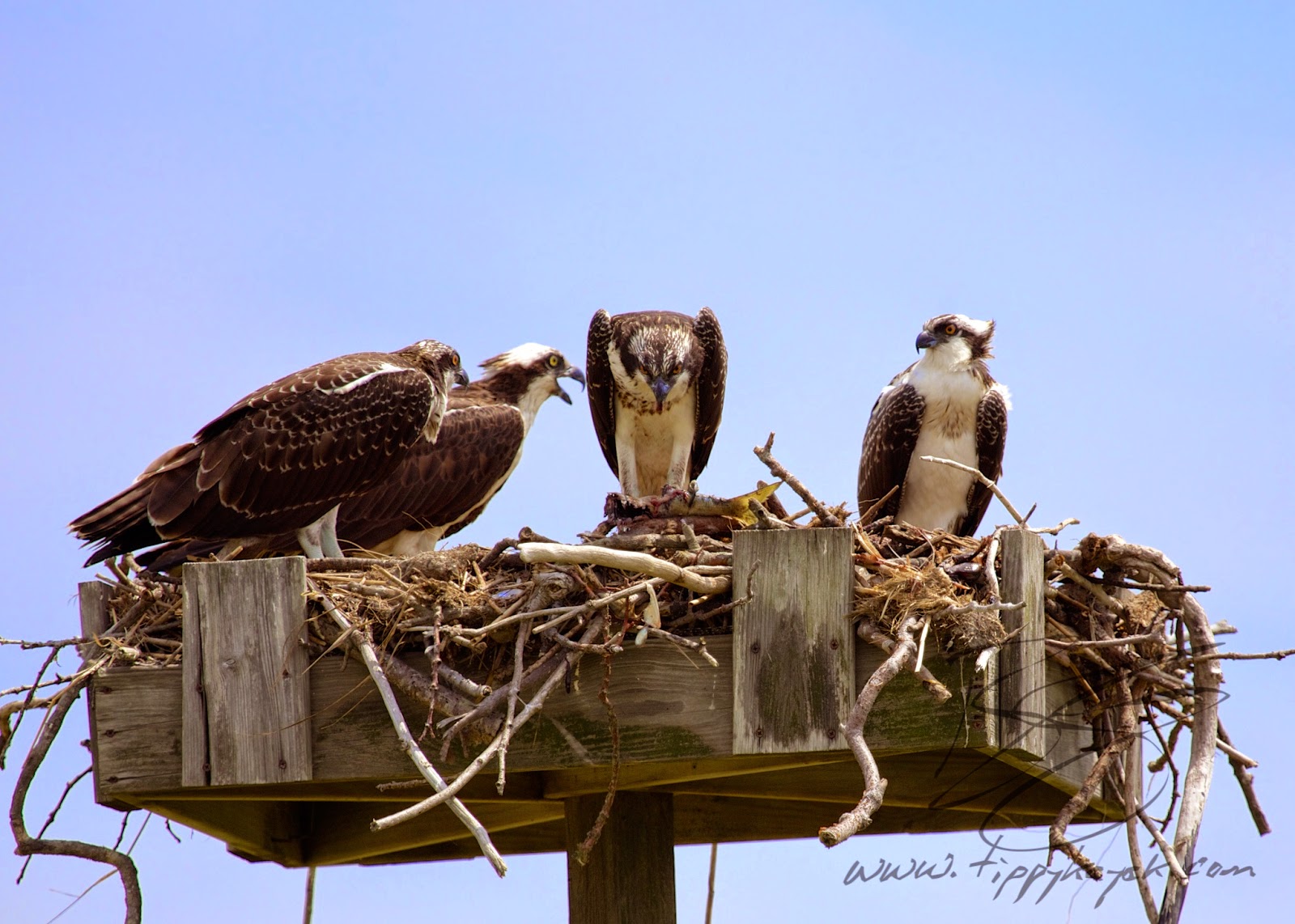 My route up the river also takes me past several nest platforms, and at this time of year, you see large families of first-year fledged birds and their parents sharing food and space.

I wish I had had a chance to get out more in the kayak this summer, but knowing how way leads on to way...
Posted by Unknown at 12:30 PM No comments:

The topic of dog safety in the car has been a hot one among my trainer colleagues, and with good reason. Most of us grew up in the era in which our family dogs simply rode loose in the car, sometimes behind a barrier in the back, sometimes just back with the kids. People had enough common sense to make sure the dog didn’t interfere with the driver, but that was pretty much it.

However, I’ve recently been persuaded that having dogs loose in the car is a hazard not just to the dog, but to the driver. Training the dogs to stay in their area has worked for us for years, but that’s only because we’ve been lucky enough not to be in an accident with the dogs in the car. So I’m certainly not writing this article as a way of judging anybody, since I’m a little late to the car safety game myself.

But here’s what persuaded me: a loose dog is a major safety problem in at least four ways.


Having been persuaded that I can no longer, in good conscience, drive with my dogs unrestrained, I’m thrown into the rather confusing world of potential solutions.

Let me preface my discussion of these things by saying that I don’t see an obvious winner, but there’s an amazing organization called the Center for Pet Safety that is currently studying these issues. CPS is a non-profit that is not affiliated with any major manufacturer of crates, pet barriers, or harnesses, and I’ve read all their published research and found it to be pretty tight all around. But, even though CPS exists and is doing great work, they simply haven’t had the time or the resources to compare all the different solutions out there to each other in order to arrive at a definitive answer. So for now, I fully respect several different ways people try to solve this problem.

The only common solutions I would advise against in all situations are putting a dog in the bed of a pickup and tethering a dog by his collar. The downsides of a pickup bed should be pretty obvious, and it's illegal around here. And as far as a collar goes, in the event of a hard stop or a front collision, a dog tied by his collar and leash will simply be killed when he is brought up short. So if you tied your dog by his collar in order to keep him from coming into the front, you need a new solution pronto.

The most common solution for restraining a dog in the car is probably the crate. The crate certainly works to keep the dog from distracting the driver, and it would definitely lower the possibility that the dog will become a projectile in an accident or escape during a rescue.

However, CPS did at least one test of a dog in a wire crate, and the resulting video, despite the fact that it uses a dummy, is still a bit disturbing if your imagination inserts your beloved pet in place of the dummy, as my imagination did. The crate in question isn’t tethered, which is part of the problem, but the basic problem with crates is that they don’t prevent the dog from building a speed differential relative to the side of the crate.

What do I mean by speed differential? I mean that when you come to a sudden stop, the tires stop the car, but anything loose in the car will continue at whatever speed you were going until it hits something. In a controlled deceleration, the friction of whatever you or the dog is sitting on is enough to keep you from sliding forwards. However, in a sudden deceleration, like an accident or simply full braking from a high speed, we need seat belts to keep us from flying forward.

So in a crate, a dog has chance to build a pretty significant speed differential before hitting the side of the crate, as you can see in the preceding video. While the crate almost certainly keeps the dog safer than being loose, this issue means that the crate may not be the safest option out there. An airline-style crate might be better than a wire one in terms of sustaining impacts more safely, but there simply isn’t clear data available on the crashworthiness of different styles and brands of crates. Either way, be sure to tether it to strong attachment points in the car with non-elastic straps.

You can also purchase barriers that keep your dog in the cargo area of your car. This option, like a crate, does keep the dog from distracting the driver, and it also keeps the dog contained if the door is opened by a rescuer. However, it leaves us with the same speed differential issue as the crate does.

At first glance, harnesses might seem a good all-around solution, but in 2011, CPS actually crash tested a number of car harness brands. Every single one failed. Again, the videos can be a bit disturbing if your imagination vividly puts your dog in place of the dummy. And remember that these are harnesses designed and sold as car safety harnesses, so any typical dog walking harness would presumably not hold up to the stress of an accident and would be little better than tethering a dog by his collar.

In 2013, CPS again independently tested a number of harness brands, and this time they released the names and detailed results. The only brand that performed acceptably was the Sleepypod Clickit. Some brands failed pretesting because they came apart when stress similar to a dog in an accident was applied, and those didn't even make it to the crash test!

As far as I can tell, the biggest problem with the Klein Metall and Ruff Rider was that their tethers were too long, so the dog slid out of the seat and gained a lot of momentum before being brought up short by the harness.  So the Klein Metall might be fine if you shortened the tether portion to 6”, since it offers an adjustable tether, but the Ruff Rider's tether does not adjust.

CPS also noted that the Sleepypod controlled the rotation of the test dog better than the Klein Metall, so that seems to be an advantage too. The last vote in Sleepypod's favor is that the company actually improved the design of the harness after examining CPS's crash test data. You can see a crash test video of the improved harness at the bottom of the 2013 harness study results page.

Page ten of the 2013 CPS report (PDF) has a great chart comparing the performance of all the harnesses that made it past the pretest.

While it’s pretty clear that I’ve personally settled on harnesses as the safest option for our dogs' safety in the car, I want to stress that I think the jury is still out. There simply hasn’t been enough testing done, and with the huge ranges of sizes and personalities in dogs, different solutions may work better for different families. Even though the early data suggests to me that a harness in general and the Sleepypod harness in particular are the best choice, that data doesn’t account for all of the real-world issues that may arise.

For example, the Sleepypod performed best on a dummy. In reality, it might be cumbersome or uncomfortable. It might sit nicely on a dummy, but still allow a real dog to pull out a leg or otherwise squirm in such a way that it's ineffective in a real accident. It may be so inconvenient to put on or to attach to the seat that it's impractical. It's hard to say without testing it on your own dog.

So if you do decide to use a harness with your dog, consider getting it from someplace with easy returns, or even from a place that allows you to try it on your dog before purchase. And don't forget to acclimate your dog to it before using it. If you spend a few minutes teaching your dog it's fun to get in and out of the harness, he'll have a far better experience when you expect him to wear it for a journey.

Lastly, remember that tether length played a key role in the crash tests. The harness does you little good if the tether is long enough for the dog to gain a lot of momentum or even to hit the seat backs in front of him.

Large-sized Sleepypods are backordered right now, but look for some high fashion photos of Golden Retrievers in car harnesses in the coming weeks!