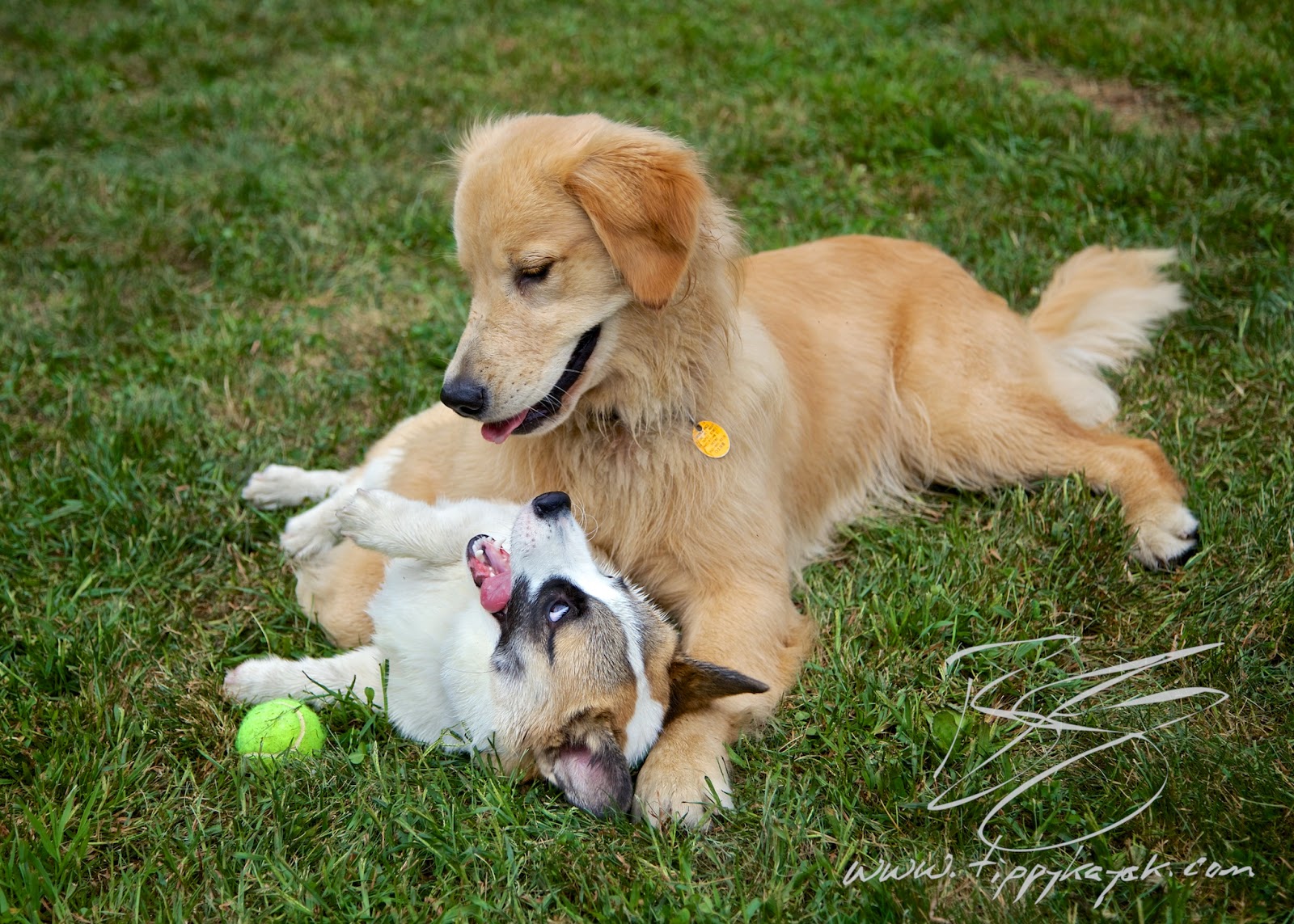 I have great fun shooting dog photos at Paws 'N Effect during special events there, and this morning, we had a "Puppy Palooza." There were different sessions for different ages and sizes, with agility equipment, kiddie pools, a sandbox with bones buried in it, and a big fenced-in area outdoors for zoomies. 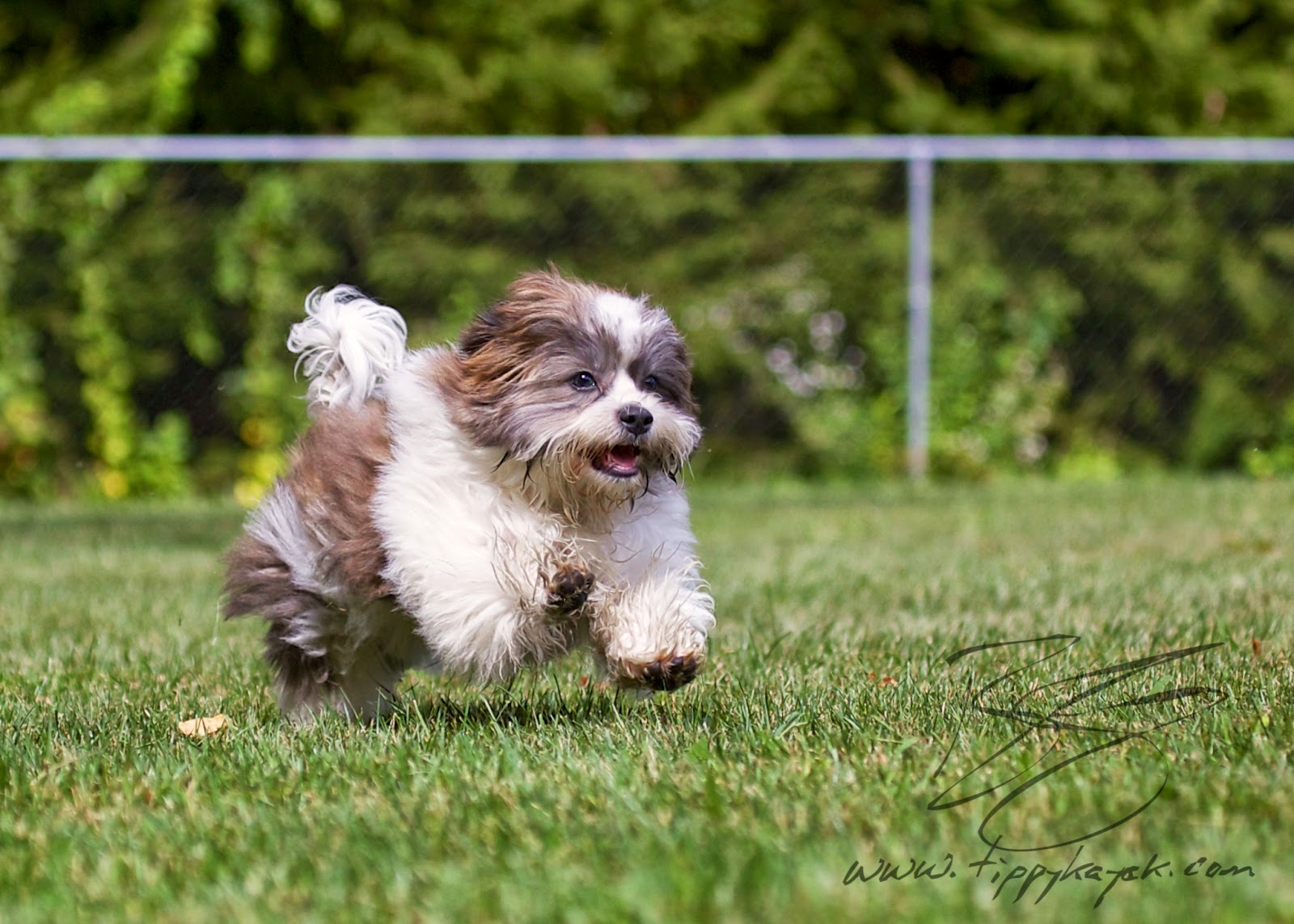 The puppies had a blast, as you might imagine. I spent a lot of time lying on my stomach, both with my 24-105 and my 100-400 lens. Periodically, I got bum-rushed by puppies, which was ridiculously fun. 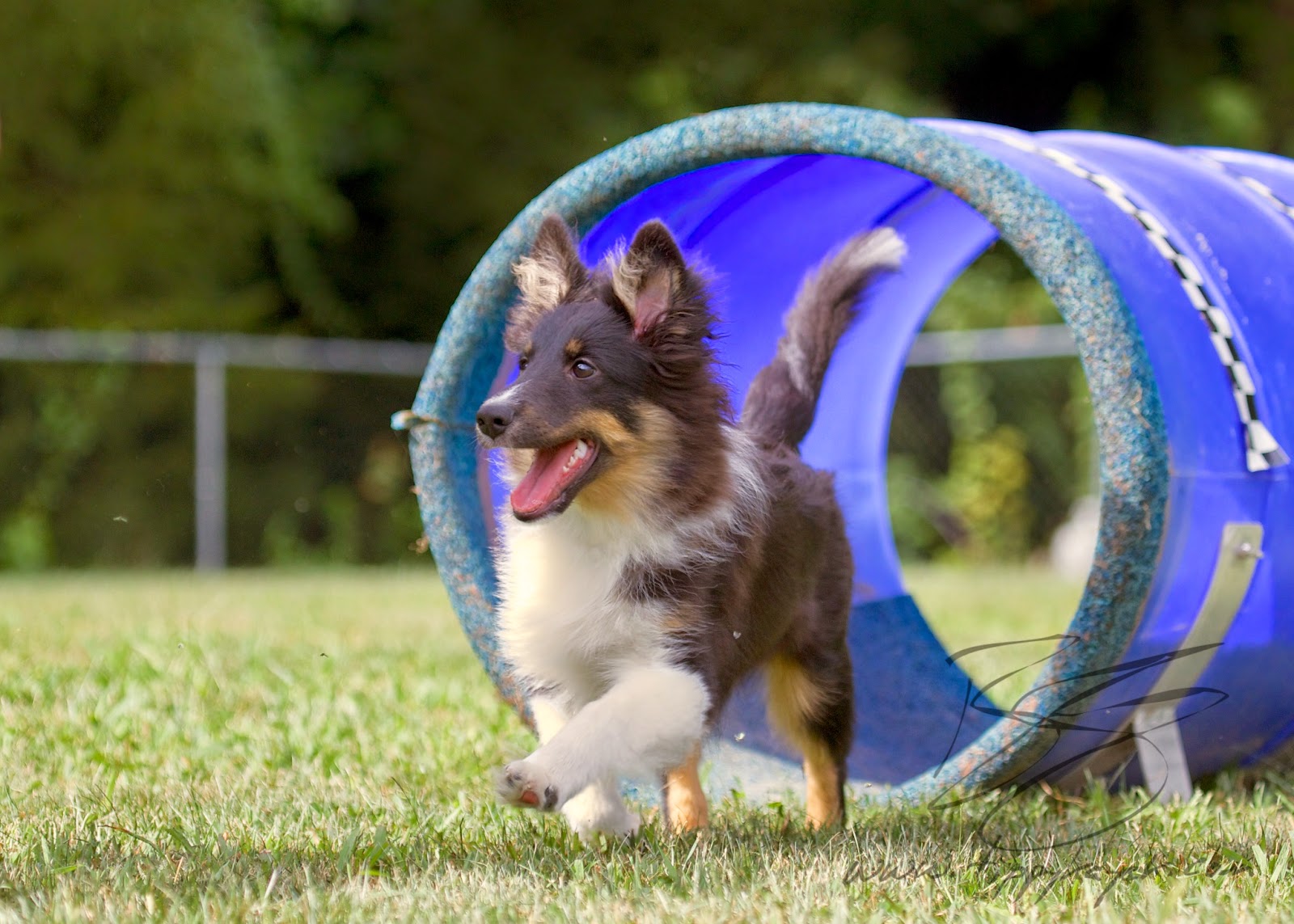 We set up all kinds of pictures while we were playing games. We released puppies on one side of this chute while I shot from the other. 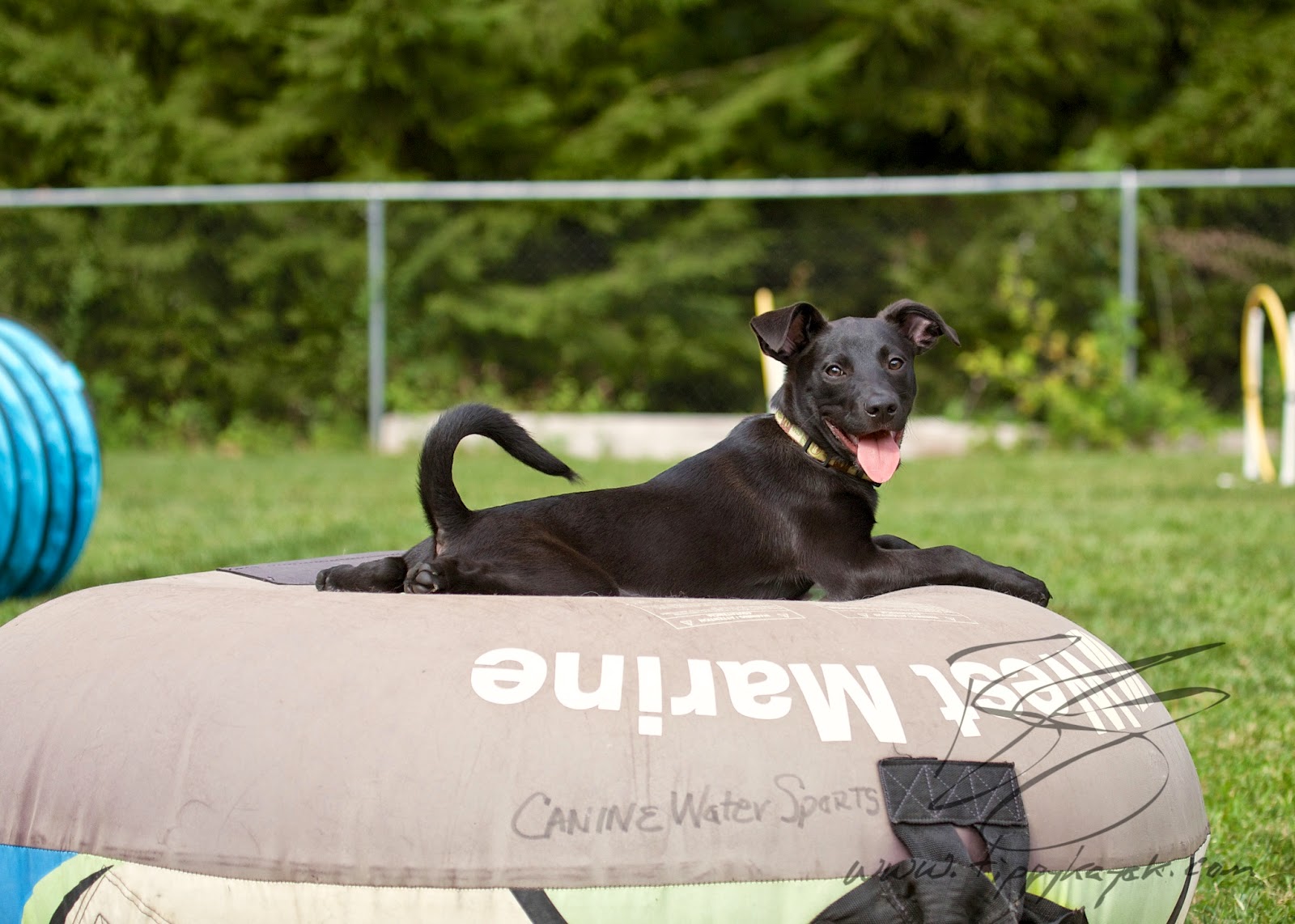 All the equipment wasn't just for fun. It was for socialization too. Socialization is all about giving puppies safe, positive experiences with new situations. This kind of socialization teaches a pup that the world is a safe place and that his people are kind, generous, and a source of safety and comfort. 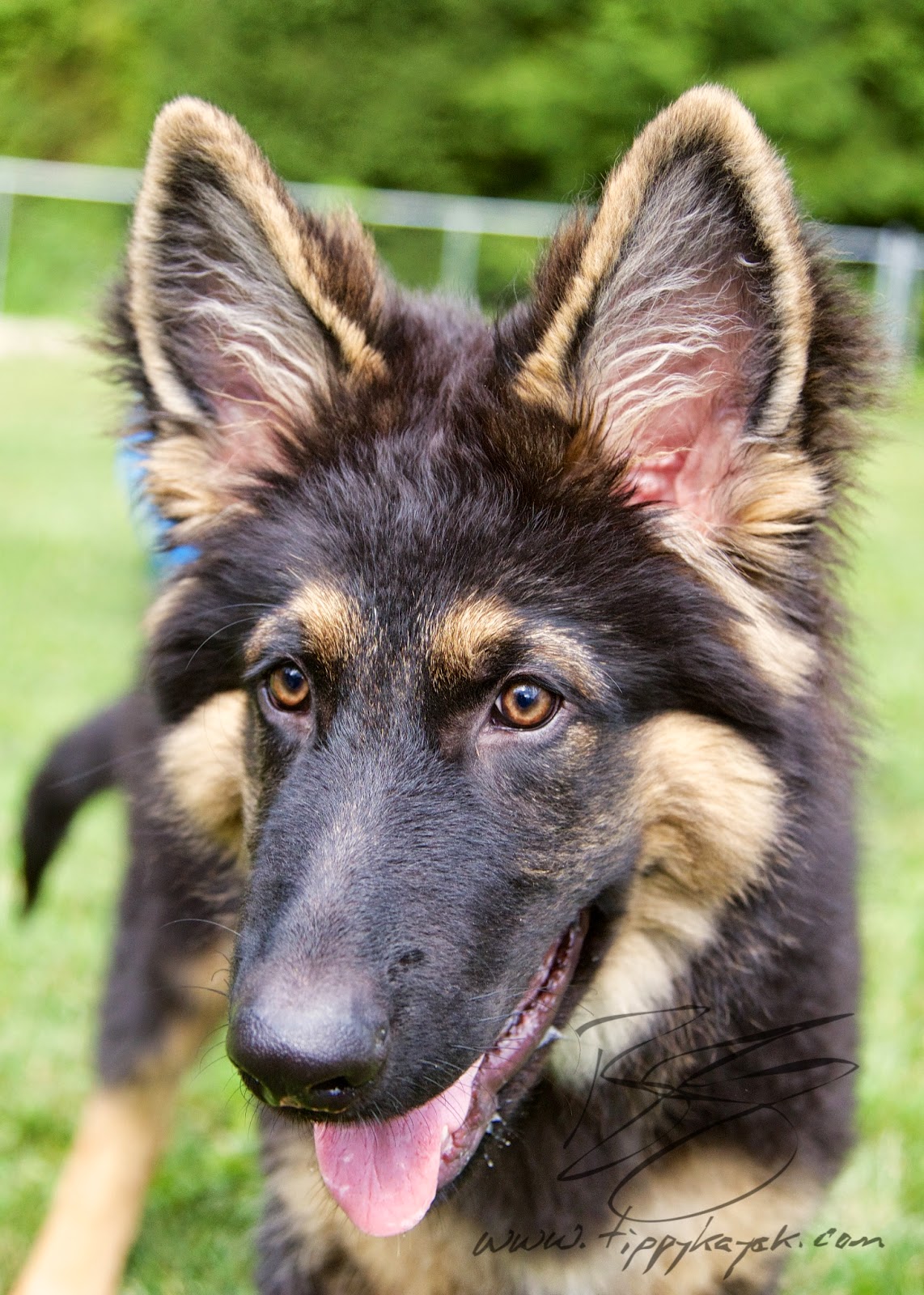 I've shot lots of portraits of dogs at this point, and I feel like I'm really getting the hang of it. I have lots of failed attempts where I misjudge the settings and get a blurry or underexposed photo, but I'm also getting some really nice ones that capture a dog's personality.

Speaking of personality, the Golden, Hudson, and the Corgi, Barley, were the only two in their session of older pups, but they hit it off as the fastest of friends. They chased tennis balls, playfought, and generally had a blast.

They even seemed to be posing for the camera at one point... 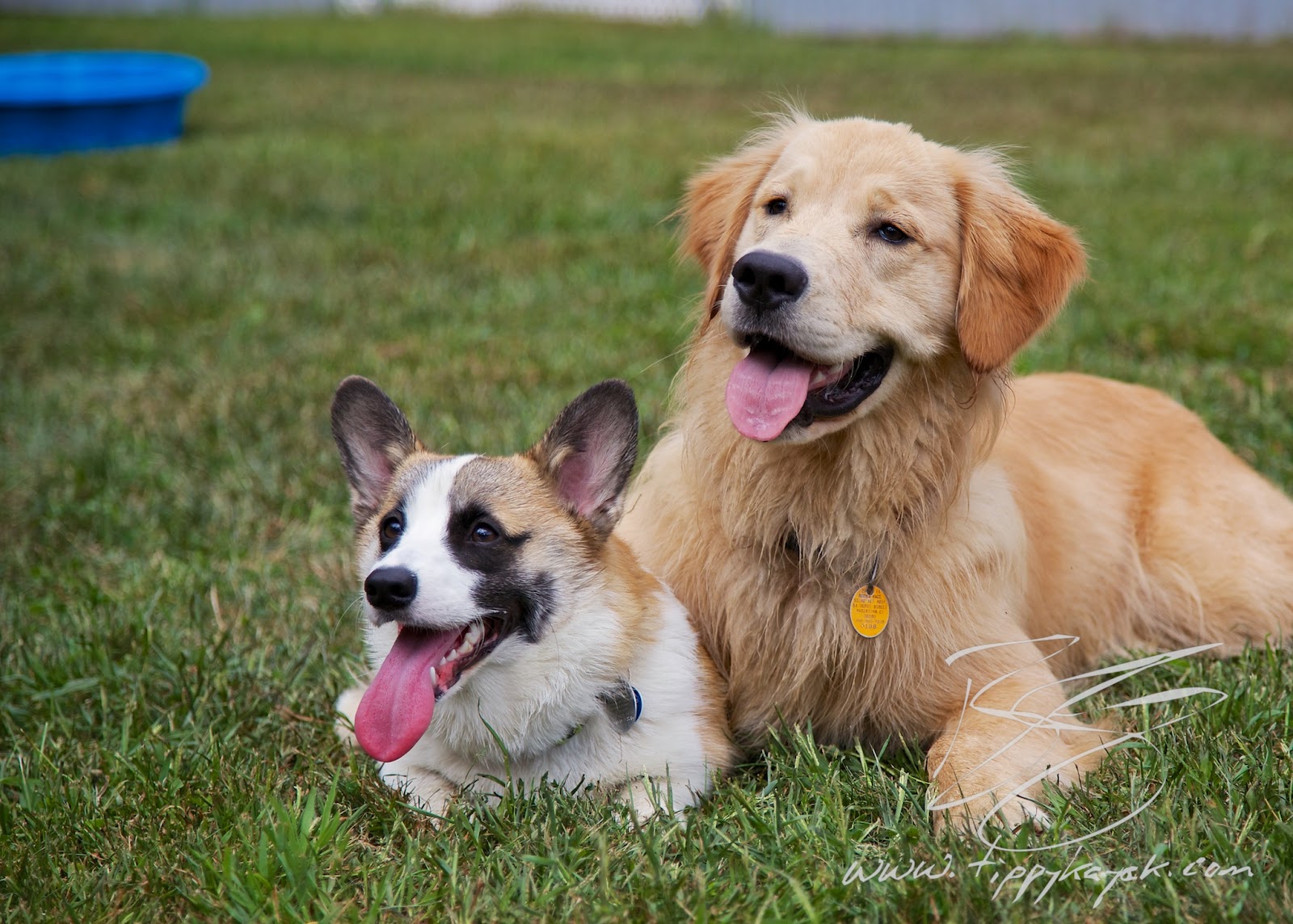 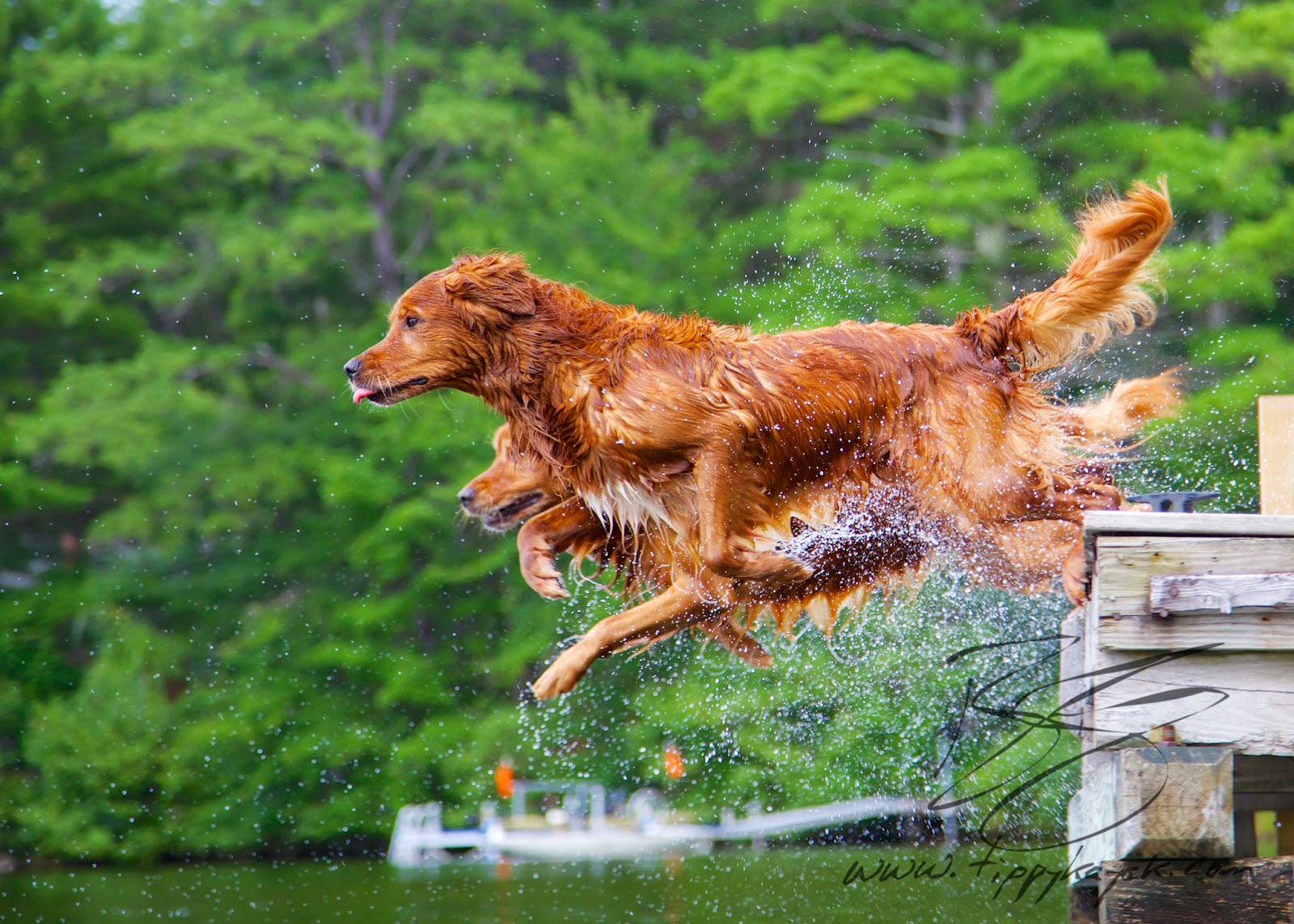 This week is our annual vacation trip up to Silver Lake, and while the weather wasn't so spectacular today, I spent a few minutes shoulder-deep in the water while Andy threw a tennis ball for the dogs. 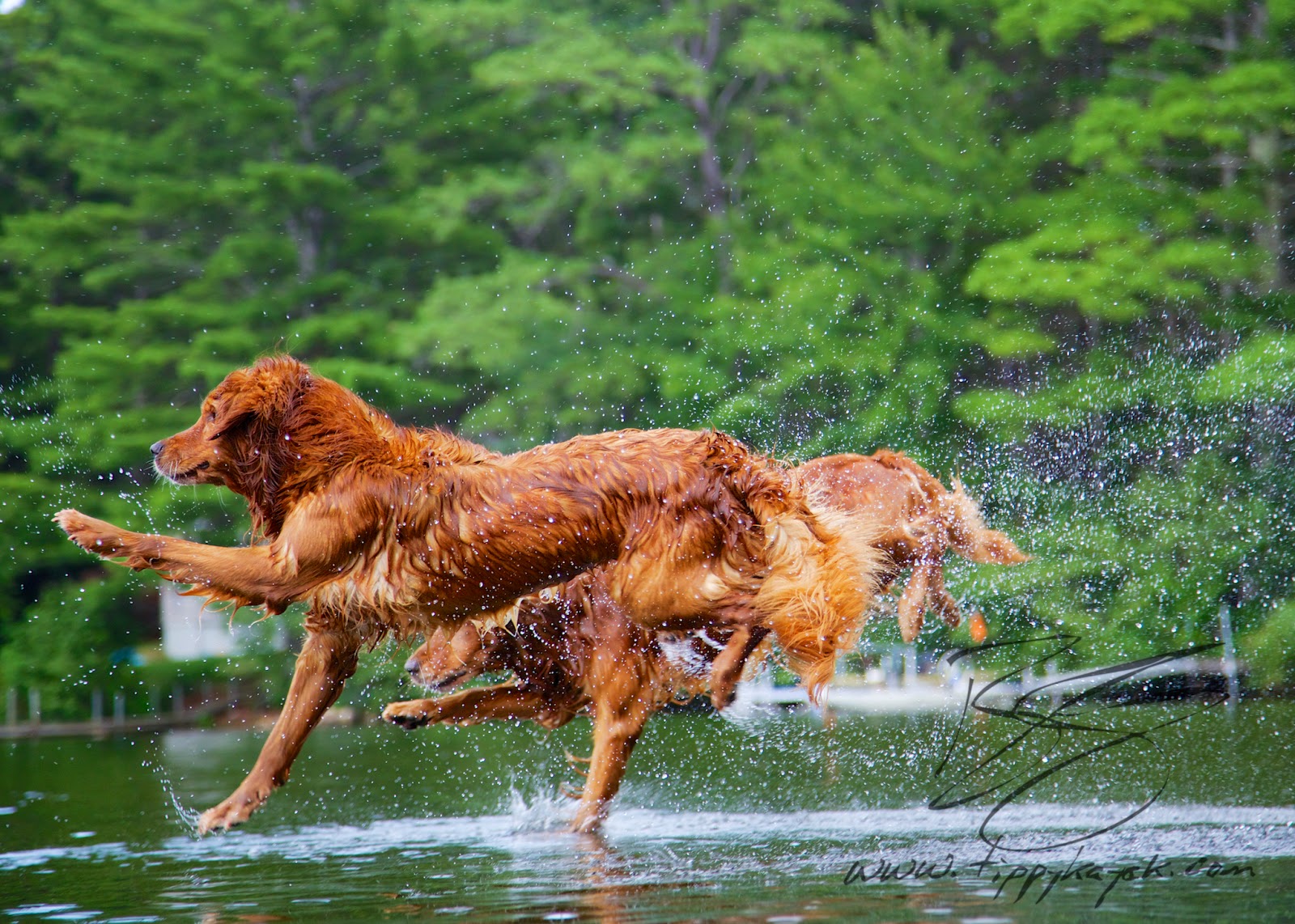 For the first time, we have two dogs who are grown up and confident at jumping off the high dock, so I got a few captures of synchronized jumps. 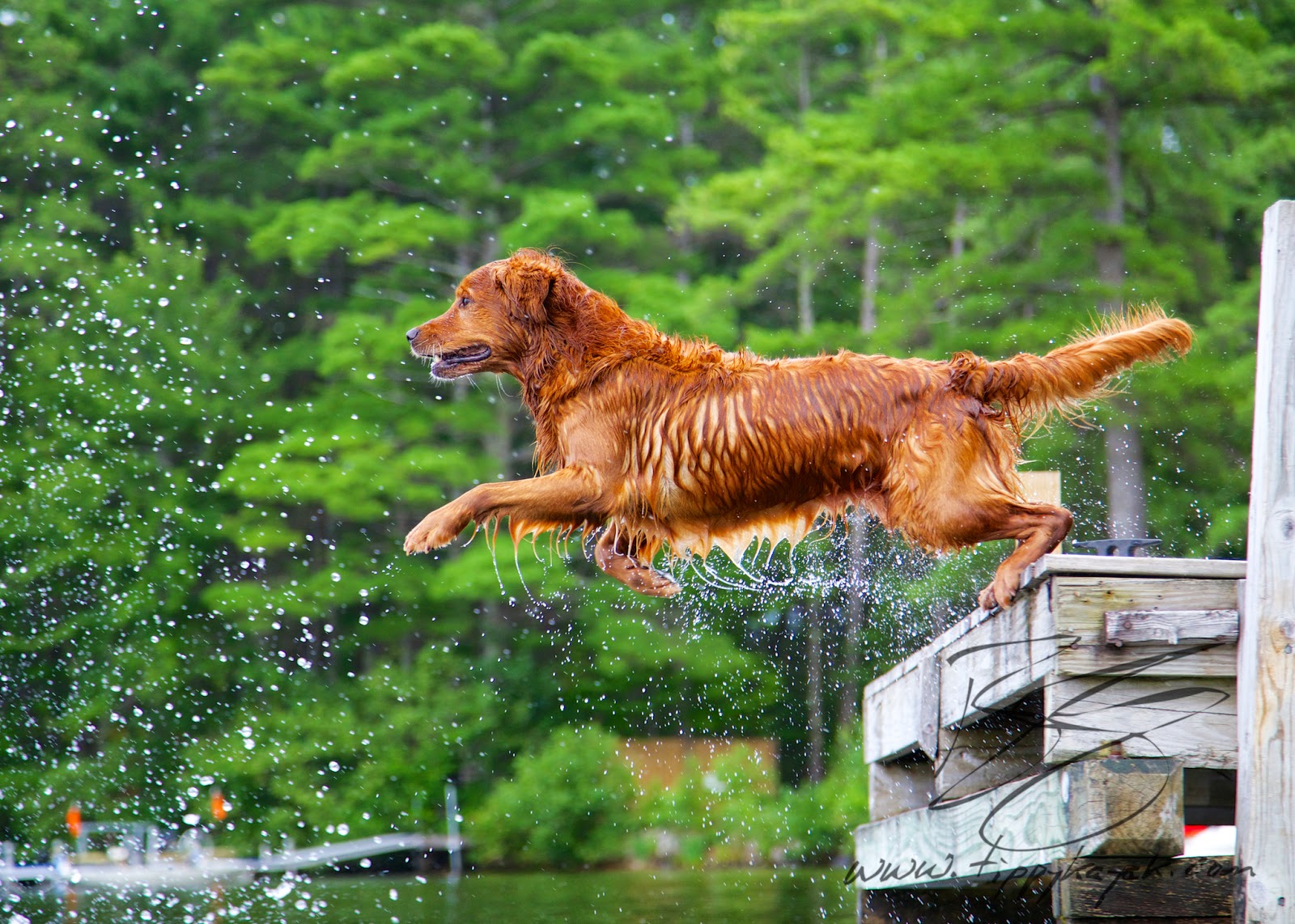 Since the dogs alternate between looking back at the thrower and out over the water, not every jump is really synchronized. That gave me plenty of opportunities to get just Jax, as Comet had a tendency to jump a little more preemptively. 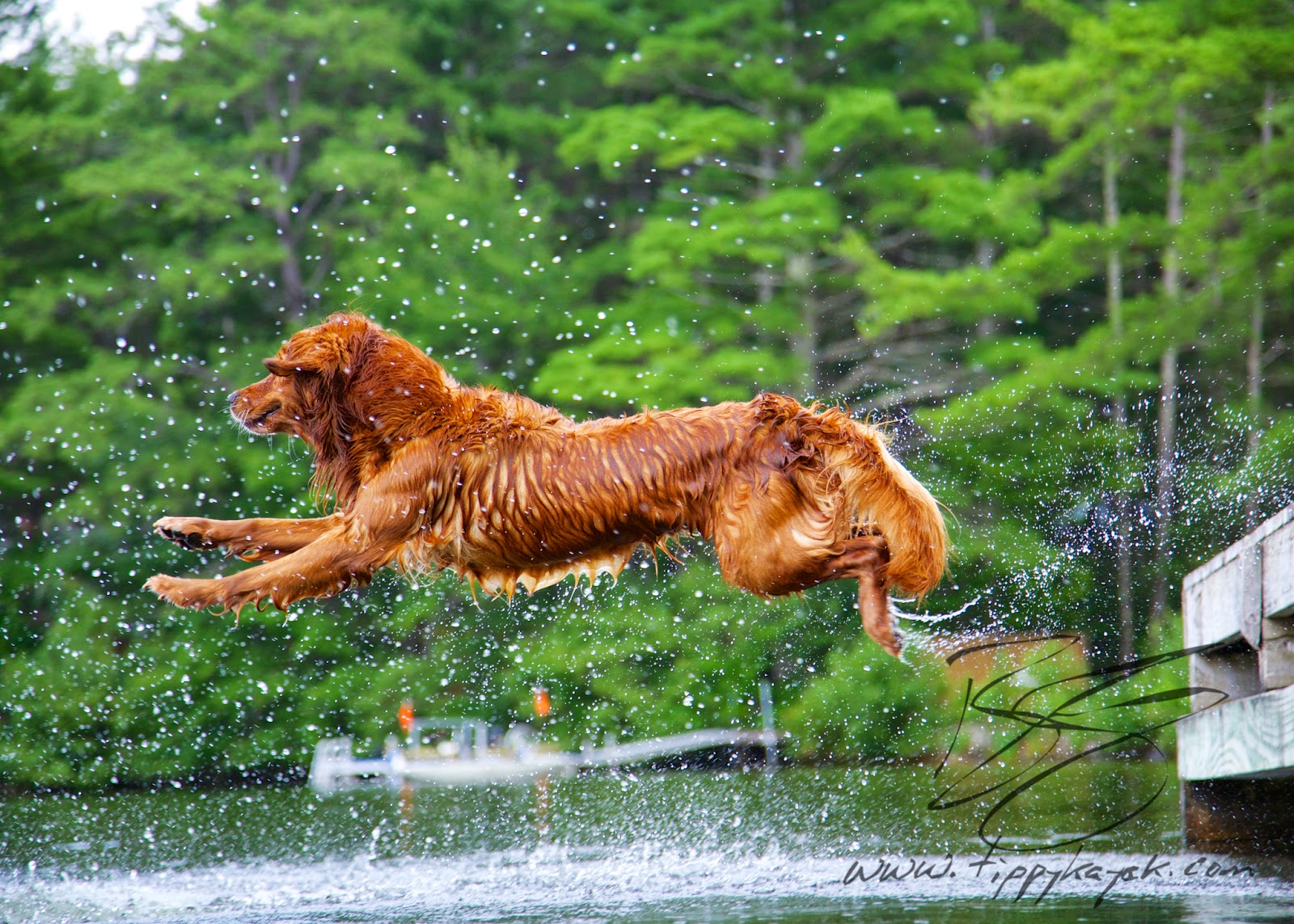 ...which gave me one more good one of Jax suspended in midair.

For the last jump, I moved out even deeper to try to get both dogs in action. I think I did pretty well. 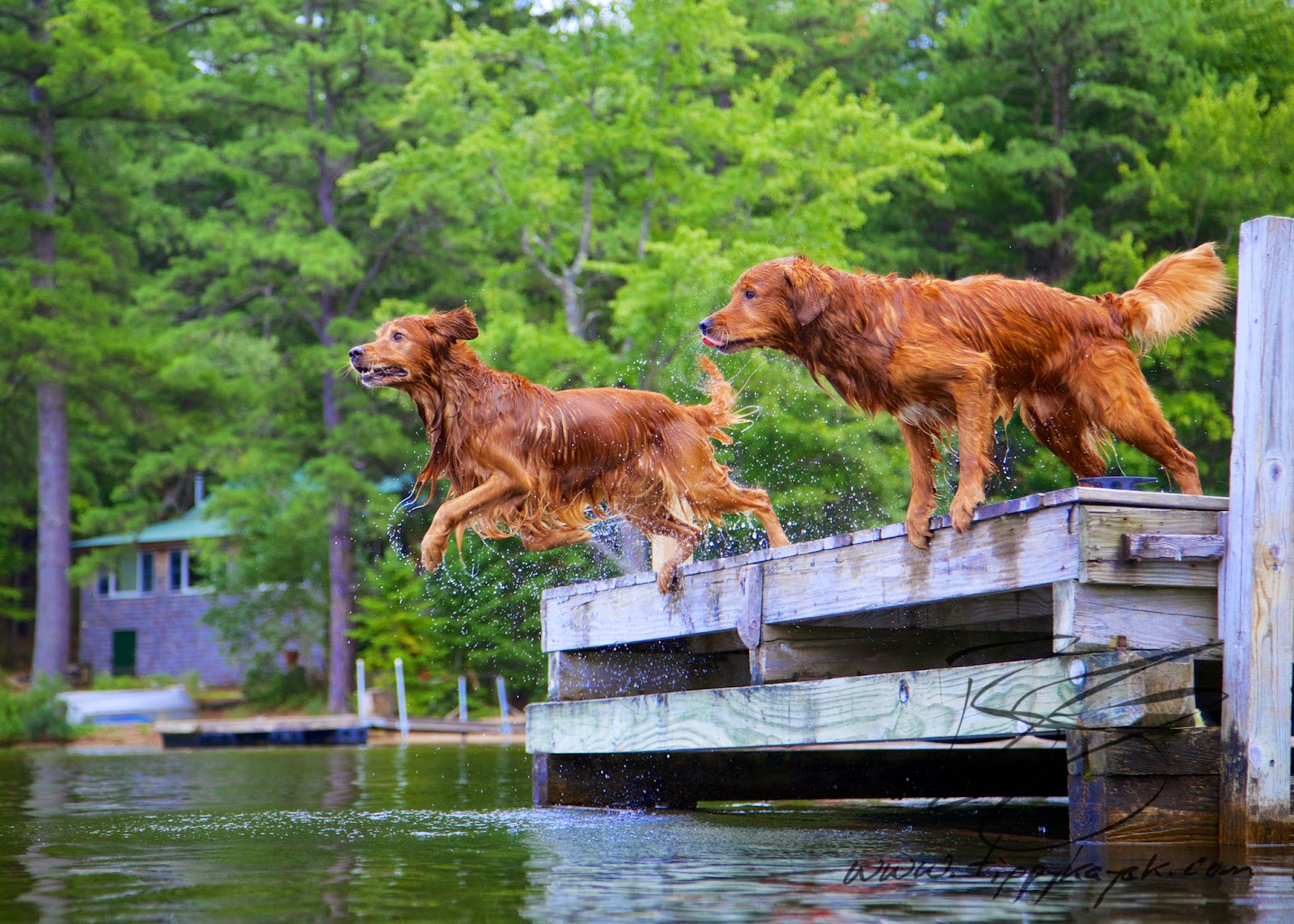 Posted by Unknown at 4:00 PM No comments: