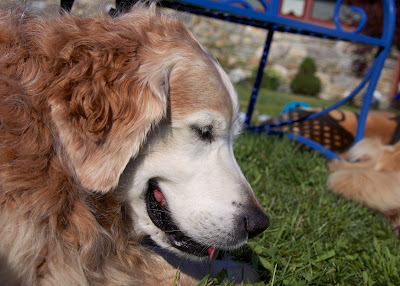 When I graduated college, one of the first things I did was start a search for my first dog. My old friend and dog expert, the oft-mentioned Jill, was my roommate at the time and was looking for a dog herself. We ended up getting littermates: my beloved dog Gus, who died in 2008, and her equally beloved Finn, who died a few hours ago.

Finn has appeared many times here over the years, and I have always loved him for the extraordinary dog he was, mixed with a kind of bittersweetness ever since Gus died.

I remember Finn at 8 weeks, when he first came home from Maine. I remember his sweet face before it turned sugar-white and how serious he looked when he would watch you talk to him, as if he was trying to learn English well enough to anticipate what you would say. I remember the way he would play with the new puppies, both Jill's and ours, years after we were no longer roommates. He played with Comet and with Jax both as babies, and he was one of the most steadfastly happy, kind-hearted dogs I have ever known.

Finn used to sing me a song when I visited. Jill tells me he didn't really do it for anybody else. He'd spin around and sing and whine for the first few minutes after I showed up, and I'd pet him and laugh with him. I never knew who was happier to see whom, the dog who was singing, or the man who was laughing and trying to pet him as they spun around.

A year or two ago, when Finn's arthritis was acting up and Jill didn't know if she'd have a few months or a few years left with him, I wrote him a letter and sent a care package for his birthday. Truly a silly thing, to send a dog a letter, but if there was ever a dog worth corresponding with, it was Finn.

I had just stumbled across an Eric Whitacre setting of an e.e. cummings poem, and while I was learning and rehearsing it, I couldn't help but think of Finn over and over, so I wrote him a happy birthday note with some lines of the poem in it, care of Jill, and I sent along some smelly salmon treats and a nice dog toy because I'm not crazy and I know dogs don't actually read.

The poem is about being thankful for the day, and "for the leaping greenly spirits of trees / and a blue dream of sky;and for everything / which is natural which is infinite which is yes" (2-4).

If there was anybody who was a leaping greenly spirit, who was a blue dream of sky, who was natural, infinite, and forever yes, it was Sand Dancer's Infinite Sky, my friend Finn. 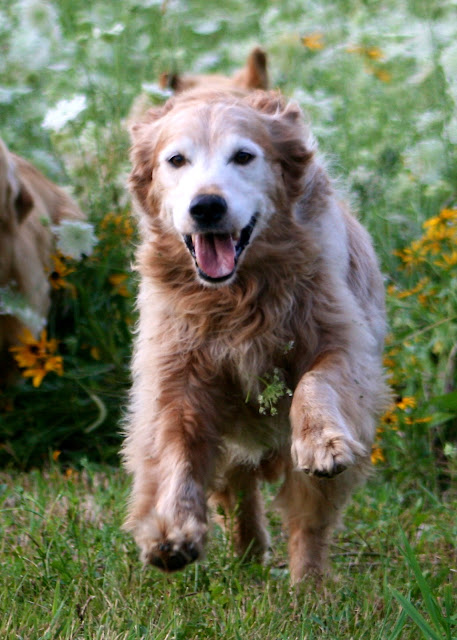 When I hike with our dogs and they've gone out of sight around the bend of the trail as it curves through the leaves, I whistle for them to call them back where I can see them.

So now when we are among those green spirits of trees, and when the sky is an infinite blue dream, and I whistle toward the bend in the trail, I'll crane my neck a little farther, and I'll let myself hope that just a moment behind Comet and Jax will come Finn and Gus together, wise and fast, clouding the air with their breath, leaving puffs of pine dust behind them.
Posted by Brian at 8:32 PM